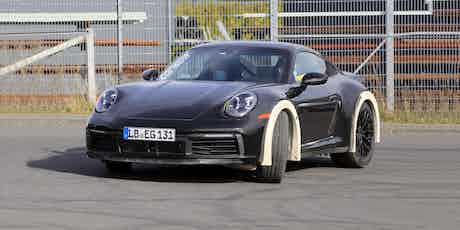 Is Porsche developing a jacked-up rally-inspired 911? This odd-looking prototype certainly suggests it might be…

The prototype Porsche 911 pictured here appears to be based on a 911 Carrera 4, clearly sporting a set of extremely crude wheelarch extensions.

Look more closely and you’ll see it also sits much further off the ground than any 911 currently on sale. Behind the front seats is a roll cage similar to the one previously spotted on the GT3 RS prototype, too.

Porsche hasn’t offered any clues as to what this new model could be, but there could be an explanation if you look to the world of customised Porsches.

Perhaps surprisingly, the 911 has a long record of success in off-road rallying, particularly in gruelling events such as the East Africa Safari.

Low-slung sports cars, such as the 911, aren’t really made for the incredibly rough roads these rallies take place on, so teams fit their cars with raised suspension and chunky tyres that significantly increase ground clearance. As a side benefit, they look absolutely awesome.

Because it’s such a good look, some 911 owners customise their cars with similar tall suspension and chunky tyres. These so-called ‘Safari’ 911s are usually older cars from the 1970s and 1980s, though some more recent examples have also been given the rally-car-inspired visual upgrades.

Porsche is often asked if it’ll ever produce an official Safari 911 based on the current car, a question that persists with the latest 992-generation. Porsche hasn’t said there will ever be such a thing but, crucially, hasn’t ruled it out, either.

So, that could be what you’re looking at here – an early prototype for a rally car-inspired version of the 911. Or it could just be that Porsche’s engineers are messing about while they have some time on their hands…