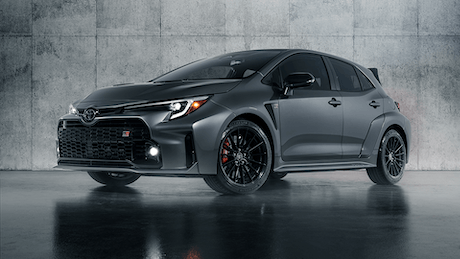 Toyota has given the humble Corolla the full-blown GR treatment. There is a catch, though…

This is the latest creation from Toyota’s Gazoo Racing division — the Toyota GR Corolla.

It takes the mechanical gubbins from the GR Yaris and turns them up to 11. There is a catch, though…

GR cars aren’t exactly subtle, and the Toyota GR Corolla is no exception.

Upfront, it gets a huge squared-off grille with functional thin air intakes sitting on either side. This bit’s practically a carbon copy of the smaller Yaris.

Things get even crazier at the back. A huge rear wing has been strapped on, there’s an aggressive diffuser plus a wicked tri-exit exhaust.

The Toyota GR Corolla yanks its engine and four-wheel-drive system from the GR Yaris. Though with a little more power at 300hp and 370Nm of torque.

Plus, it comes with a manual gearbox too. No auto option here (enthusiasts, rejoice).

You’ll be able to control how the GR Corolla distributes its power, too. As standard, it’ll send 60% to the front and 40% to the rear. A grip-focused mode gives that a perfect 50/50 split, while a skid-oriented setup will let you send 70% to the rear.

You’ll need to opt for the Performance Pack for that, though, which brings two limited-slip differentials.

There are some tweaks to the interior of the GR Corolla for a sportier feel, too. Faux-leather sports seats make an appearance, along with some red stitching and GR badges dotted about.

A 12-inch digital driver’s display has been included too, along with an upgraded 8-inch infotainment system. The latter now has Android Auto and Apple CarPlay as standard.

The catch? You won’t be able to buy the Toyota GR Corolla if you’re in the UK or Europe. Boo.