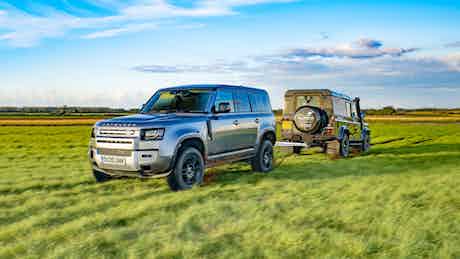 The classic Land Rover Defender has already faced-up to an all-new Defender in our off-road showdown, but now it faces an even tougher challenge – a tug-of-war.

Tap the video below to watch the tug-of-war.

Sometimes, you need more than just fancy gizmos and high-tech locking differentials to win a tug-of-war. Don’t discount the value of good-old-fashioned brute strength. Well, off-roaders don’t come much more old-fashioned than the original Land Rover Defender, do they?

The model we have here is powered by a 2.2-litre turbocharged diesel engine. OK, so it produces just 122hp, but at least its 360Nm torque figure is pretty respectable. Everything in this old Defender is manual, from the gearbox to the low-range mode and the locking centre differential, so Mat will have his hands full (literally) keeping it all in check.

Compare the best 4x4s on sale

Overall, this boxy bastion of the off-road world weighs 2,062kg. But, the brand-new Defender 110 it’s been hitched to tips the scales at an even more portly 2,415kg.

Part of the reason it’s so heavy is that it’s absolutely loaded with tech, including Land Rover’s latest terrain-response system. This can tell exactly what’s going on under the Defender’s off-road tyres and tweak the settings for the four-wheel-drive system and automatic gearbox without you having to lift a finger.

The new Defender doesn’t just have technology and weight on its side, it trumps the old car for power, too. Sure, it’s 2.0-litre turbocharged diesel engine is a bit smaller than the old car’s 2.2-litre engine, but it produces a convincing 430Nm of torque and 240hp. That’s almost twice the power the old Defender can muster.

So which will come out on top in a tug-of-war? Watch the video to find out.