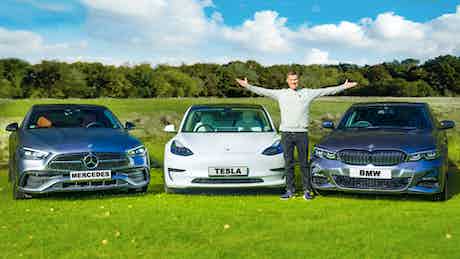 The BMW 330e and Mercedes C300e are two of the best plug-in saloons currently on sale. But should you have one of these or a fully-electric Tesla Model 3? Read on to find out.

In the saloon market, you have so many options to choose from. If the decision wasn’t tricky enough, you have different choices in power as well – petrol, diesel, hybrid or all-electric.

Mercedes and BMW have been so dominant in the saloon market, but relative ‘new kids on the block’ Tesla has been looking to take a big piece of the pie.

With the BMW 330e, Mercedes C300e and Tesla Model 3, you have three high quality saloons that are built on two different types of powertrain. The 330e and C300e feature petrol-hybrid power, while the Model 3 is all-electric.

But which of these will suit you best?

None of these three is what you might call ‘ugly’. But one is definitely closer to that end of the scale – and that’s the Tesla.

With its futuristic design, the Model 3 lacks a grille and is quite tidy – but we can’t help but think it looks a bit fish-mouthed at the front. Its clean lines won’t look out of place in 2035, and it’s rather inoffensive – but that plain, slippery shape might not be to everyone’s liking just yet.

If you’re after something a bit sportier, the 330e certainly fits the bill. It’s not as simplistic or smooth as the Tesla, as you get lots of lines across the bonnet and bodywork to make the BMW appear more muscular than most other saloons.

But it’s the Mercedes that looks the best out of the three. It’s got smooth lines across most of the bodywork, but with a few nips and tucks around the front grille and rear bumper. In short, the C-Class looks super cool.

The Mercedes also leads the trio for interior quality. Basically a mini S-Class, the C-Class comes with a great central portrait touchscreen and a clear driver’s display with crisp graphics. It also feels very plush inside, thanks to leather upholstery and metal trim finishers.

It’s not the most sturdy though, with some panels feeling a little bit cheap and not as well put together as it could be. However it certainly looks the nicest out of the three.

For the Tesla, the future is clearly now. It’s got a clean and tidy interior finish that is almost completely buttonless – save for a couple on the steering wheel and the doors. The central 15” display is fabulous – but as it holds almost all the settings for the car, it can be quite annoying to use on the go.

Tesla was notorious for its poor interior build quality not too long ago – but the Model 3 shows exactly how far they’ve come to catch up to brands like BMW and Mercedes. It’s a vast improvement, but it’s still not quite a match for those two alternatives.

If the Mercedes or Tesla cabin are just a bit too flashy for you, then the 330e relies more on build quality and ease-of-use than style. Not to say it’s not got any decent tech – it has a touchscreen infotainment screen that’s simple to use, while the driver display is clear. That said, not everyone will like the hexagonal-shaped dials.

But the BMW majors in build quality. It’s all very sturdy and solid, with little to no scratchy materials used. It’s not exciting, but it’s superbly functional.

In the three cars we had to test, the spec of the C300e was that bit more comfortable – although both the Mercedes and BMW suffered the same flaw. Both have a huge transmission tunnel going through the middle of the car, meaning foot room and space for a middle seat passenger is compromised.

The seats of the C300e are slightly more comfortable than the other two, as they’re more sculpted and are in a great position. The 330e is similar, but the seats are a little flatter. Legroom is marginally better in the BMW, while the headroom is pretty equal between the two. Cabin-wise, the BMW just pips the Mercedes for space.

However, for boot and storage space, the Tesla is the clear winner. Both the Mercedes and BMW have smaller boots than normal due to the extra electric running gear for the hybrid setup. The Mercedes has a 315-litre boot, while the BMW has 375 litres in the back. Both have through-loading – which you don’t get on the Tesla – and you can fold the seats down by pressing a button or pulling a lever.

In the Model 3, you get a 425-litre boot, already bigger than the other two. But then Tesla puts a cherry on the cake thanks to a 120-litre front boot. It doesn’t have through loading, but you can still fold the rear seats down to create a flat floor – although you need to do that from the back seats.

If you were to match the standard BMW and Mercedes up against the Tesla, the German saloons would be more engaging and refined. But by throwing hybrid power in the mix, you might be surprised.

Starting with the 330e, it feels very much like any other 3 Series when you drive it thanks to the feel you get from the steering. But the added weight of the electric system means the suspension needs to be stiffer to hold the weight – meaning bumps are felt through the car more.

The 330e is fitted with a 2.0-litre turbocharged four-cylinder petrol paired to an electric motor, combining for 292hp. When cruising along in electric only mode – available for 37 miles – and you want to speed up, the petrol engine is sluggish to react. It certainly doesn’t feel as sporty or fun to drive as fuel-only 3 Series models.

The 12kWh battery pack is smaller than the Mercedes’ 25kWh unit, and you can only charge it up using AC current at a maximum of 22kW. The Mercedes’ battery, on the other hand, can be charged on direct current (DC) at a rate of up to 55kW for faster replenishment.

In the Mercedes, you get the choice of either a 2.0-litre petrol or 2.0-litre diesel with the electric motor – developing 312hp and 306hp respectively. Here with the petrol version, the switch from electric to petrol power is much slicker. That said, you won’t be making that change as often, as the Mercedes can run for 62 miles on electricity.

The C300e has a more comfortable setup than the BMW and although you can feel the additional weight through the corners, it holds itself well. It’s just as refined as the BMW, but the engine can sound quite strained at first when you put your foot down.

Compared to the 330e and C300e, the Model 3 is the clear winner for driving about. It’s quiet, only slightly firmer than the comfy Mercedes and punchier when you put your foot down. The entry-level Standard Range Plus has a single motor developing 272hp, and while it’s down on power compared to the hybrids, it feels much faster.

You’re also able to charge the 58kWh battery much faster than both of the hybrids’ smaller battery packs – and Tesla’s expansive Supercharger network means you’ll never be too far from a charging point. Between these three, the Tesla is also the most fun to drive, and although there’s no real feel from its exceptionally rapid steering, it doesn’t feel as sluggish as the other two.

The 54kWh battery pack is bigger than both the Mercedes’ and BMW’s setups combined. This makes for an extensive range of 278 miles, and thanks to a charging capacity of 170kW, you can fully charge this Model 3 faster than either of the hybrids. Impressive stuff.

Where the BMW and Mercedes do claw some points back is the fact that if you run out of electric power, you can just run on the petrol engines. But if you plan your long journeys, and remember you can refuel at home all the time, then the Tesla won’t be any less practical.

All three cars here are very capable and could be credible choices. Between the two hybrid choices though, the Mercedes edges the BMW by being that bit more stylish, comfortable and usable on electric power.

But for the test as a whole, the Tesla Model 3 is a more balanced car. It’s the better one to drive, is more practical and is much less compromised than the BMW and Mercedes. Yes, you need to make sure longer journeys have suitable stops for you to charge up, but for day-to-day driving it runs rings around the hybrids.

This test just proves that EVs have come a long way, and hybrids aren’t as practical for daily driving anymore. But if you still aren’t convinced by the all-electric argument, these plug-in hybrids do make for an excellent stepping stone. And of the two PHEVs, the Mercedes C300e is the model of choice here.

You’re now able to buy and spec a Tesla Model 3 through carwow, with prices starting from £40,990. Head over to our deals page to find out more.

The BMW 330e is one of a quality range of 3 Series models. If it suits your style and you want to save some money on one, check out the BMW 3 Series deals, where prices start from just over £36,000.

Mercedes adds 19-inch alloy wheels, an advanced adaptive high beam system and a 360-degree camera for the AMG Line Premium. You also get augmented reality for the sat-nav.

With the choice of either Partial Premium or Premium interiors, the Model 3 comes with a 15-inch touchscreen, heated front seats, a tinted glass roof and a premium sound system.