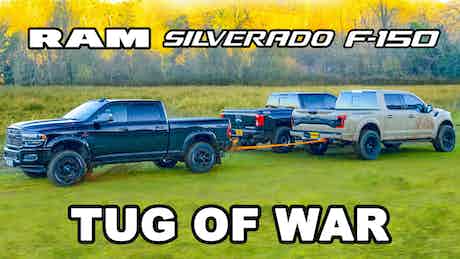 It’s time for an almighty American tug of war.

Mat’s kicking off this video in the Chevrolet Silverado, and he’s going up against the Ford F-150 Raptor.

Now of course, when it comes to a tug of war it’s all about pulling power, so let’s look at the stats. Starting with the Chevrolet Silverado, it’s powered by a 6.2-litre naturally-aspirated V8 that can deliver 420hp & 624Nm of torque. It’s pretty heavy too, as you can imagine, weighing in at 2,600kg.

Next up we have the Ford F-150 Raptor. It’s hiding a 3.5-litre twin-turbo V6 under the bonnet that can put down 450hp & 691Nm of torque. Its weight is also pretty identical to the Chevy. So with that in mind, you might think the result is a foregone conclusion.

Well hold your horses because we have a third challenger, a Dodge RAM with a 6.7-litre straight-six diesel engine. Its power may be down compared to the F-150, at 420hp, but it has 1,457Nm of torque.

Want to find out what it can pull? Then you’ll have to watch the video.