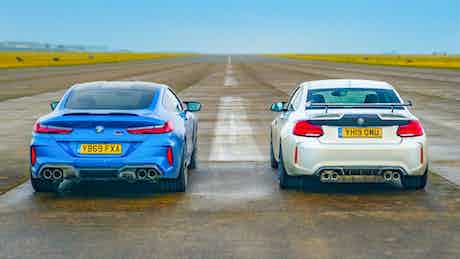 It’s sibling rivalry in carwow’s latest drag race, as the BMW M2 Competition goes up against its bigger brother, the BMW M8 Competition. Watch below to find out which BMW M car comes out on top.

On paper, the winner of this drag race looks like it’s a foregone conclusion. After all, the BMW M8 Competition’s 4.4-litre, twin-turbo V8 is more than 50% more powerful than the 3.0-litre, twin-turbo, six-cylinder engine in the M2 Competition (625hp vs 410hp); the bigger M8 also has the added traction of all-wheel drive on its side, over the rear-wheel drive M2.

That advantage bears out in the official performance specs, too. While the M2 Competition isn’t what you’d call a slouch (with the seven-speed automatic gearbox fitted, as the car in the video is, it can go from 0-60mph in 4.2 seconds), it can’t hold a candle to the M8 Competition’s 0-60mph time of 3.2 seconds.

However, how does all of this pan out when the drag strip is damp, rather than bone dry? And can the M8 Competition maintain its advantage in its rear-wheel drive-only mode, which automatically disables the traction control and stability assists that would no doubt be mighty handy on a slippery surface?

Watch the video above to find out!