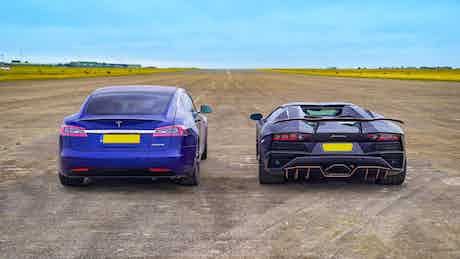 The latest Performance version of Tesla’s all-conquering Model S goes toe-to-toe with a roost-ruling Italian supercar – the Lamborghini Aventador S. See which car comes out on top in our latest drag race…

This matchup might sound familiar – after all, we’ve pitted a Tesla against a Lamborghini before. But, in this drag race, it’s the latest Performance version of the electric Model S going up against Lamborghini’s sharpened, lightened Aventador S Roadster.

Looking at the raw power figures, it’s the Tesla that has the edge. Its dual electric motors pump out a massive 825hp and an insane 1,300Nm of torque. And, being an electric car means that all that torque is available as soon as you hit the accelerator.

The Lamborghini isn’t exactly lagging behind, though. Its 6.5-litre V12 makes 740hp and 690Nm and it sounds absolutely glorious because it does all this without the help of some sound-sapping turbos.

No heavyweight matchup such as this would be complete without a weigh-in, though. And it’s here that the Lamborghini claws back some points. The Tesla Model S tips the scales at a belt-busting 2.2 tons – mostly down to the weight of its hefty 100kWh battery pack.

Having just the one conventional car battery means the Lamborghini is the featherweight upstart to the Tesla’s Mike Tyson in this fight. Extensive use of lightweight carbon fibre means it chalks-up fewer than 1,600kg.

These cars aren’t without their similarities, though – and we aren’t just talking about the number of wheels they come with. You might not guess it from their wildly different designs, but both come with four-wheel drive for impressive traction from a standing start. Although, the Tesla’s no-nonsense grip-and-go launch control is a far cry from the Lamborghini’s tarmac-scarring wheelspin technique that has all the subtlety of Rupaul doing a eulogy.

And, if that wasn’t enough, driving the Lamborghini is Mat’s old nemesis – Yianni from Yiannimize. They’ve gone head-to-head before in a range of Tesla and Lamborghini models, from the Model X to a Urus SUV, and neither wants to lose this race.

Watch the video above to find out who’ll be grinning from ear to ear and who’ll be left pounding the steering wheel in frustration.