Smart EV charging: what is it, and why is it being introduced? 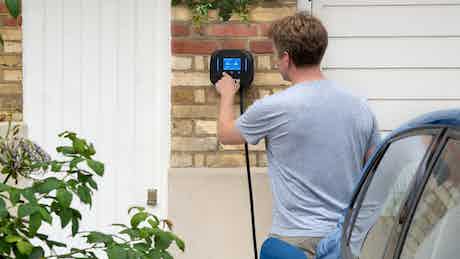 We’ve come a long way from using three-pin plugs to charge electric cars: the latest smart chargers could save you serious money

‘Smart’ is one of the foremost buzzwords of recent years. Everything from TVs and Phones, to fridges and watches has evolved from being ‘dumb’ to attaining some level of ‘smartness’, and electric car chargers are no different.

Early adopters of electric cars would once plug into a three-pin domestic socket to charge their vehicles but, today, dedicated wallboxes are the default choice for those charging at home.

Those wallboxes have now become smart, to the extent that legislation was recently introduced to ensure that smart chargers are the only type that can be sold to the general public. But what is smart charging, what are the pros and cons, and why is it being mandated?

What is smart charging?

First, smart charging only applies to private chargers that you get at home and possibly workplace car parks – public EV chargepoints are subject to separate legislation, and none of the following applies to them.

In simplest terms, the ‘smart’ in smart charging means that a home EV charger can send and receive information to and from your electricity supplier and your car, and control when the car is charged based on the information communicated.

This doesn’t happen without any input from you, though: in fact, the communication smart chargers are capable of is designed to work in conjunction with inputs from the driver.

Smart charging is also designed to work best with electricity suppliers that offer peak and off-peak tariffs like Economy 7, which not all do at present.

What does the law on smart charging say?

The legislation stipulating all new home chargers must be smart became law on 30 June 2022.

Smart chargers also come pre-programmed to charge during times when electricity is in low demand (IE overnight), but the first time you use them they must ask if you want to accept these default settings, or choose your own.

Smart chargers must also be able to randomly delay turning on by up to 10 minutes at off-peak hours to avoid the grid being overloaded with sudden spikes in demand the moment electricity gets cheaper.

Why is smart charging being mandated?

The UK is set to ban sales of new petrol and diesel cars by 2035. With roughly two million new cars registered annually in normal (IE pre-pandemic) years, we’re going to see a lot more electric cars being charged – especially given there are only around half a million or so EVs on our roads at present.

National Grid, which operates the UK electricity network, is optimistic energy demand will not outstrip supply, predicting a 10% increase in electricity use if “we all switched to EVs overnight”.

Nonetheless, the regulations are being introduced to help manage the mass uptake of EVs, and to make best use of renewable energy generation, which can be unpredictable.

The main advantage of smart charging is that it can save you money; a worked example is the best way to illustrate this.

Let’s say you’ve had a smart charger installed, and also have an energy tariff that is designed for EV drivers – Octopus Energy’s ‘Go’ tariff is a good example of this.

The Go tariff has two electricity prices: one for off-peak, and one for peak.

Prices for peak electricity vary depending on where in the country you are, but for this tariff around 35 pence per kiloWatt hour is typical during peak hours, which run from 04:30 am to 00:30.

Off-peak hours are from 00:30 to 04:30, and during these four hours electricity only costs 7.5 pence per kiloWatt hour – less than a quarter of the price.

Here’s where the smart element comes in.

If you have, for example, an Ohme Home Pro smart charger (which you may well do, as Octopus and Ohme have an ongoing partnership), you can configure the charger via its smartphone app to only charge your car during those four off-peak hours.

Assuming the chargepoint is delivering electricity at 7kW (this is the fastest rate most domestic electricity supplies can charge an EV), then you’ll be getting 28kWh of electricity over those off-peak hours, at a cost of £2.10. The same electricity at peak times would cost £9.80.

Want to switch to electric? Sell your old car with carwow

You may be thinking that four hours isn’t long enough to fully charge an EV with a 7kW home charger, and you’d be right; but the average motorist covers just 21 miles a day, so most of us, most of the time, won’t be charging an electric car from empty to full that often – we’re more likely to be keeping them topped up.

Other ways smart charging can be configured include:

Making use of off-peak electricity is a great way to save money on energy costs – what better time to have your EV charging than overnight when most of us are asleep, after all?

But the very reason electricity is off-peak during the wee small hours is because it’s not being used that much – something that’s likely to change as more and more of us buy EVs and have the charge up overnight.

It may be that once the majority of the UK’s 31 million or so cars become electric (which will take 15 years or so from 2030, given current sales trends), overnight off-peak electricity may be a thing of the past, with off-peak hours potentially being during the day, forcing cash-conscious drivers to get creative about how and when they charge.

Some may wonder whether smart chargers will facilitate the separate taxation of electricity used for EVs, but this is unlikely as it would be too easy for drivers to circumvent taxed power by plugging into a conventional (albeit slower) three-pin plug. Our analysis of how EVs might be taxed in the future has more details on this.

There is also the concern that if demand on the grid is too high, drivers will see their charge sessions slowed or stopped – though this information should be communicated and signposted clearly, so it shouldn’t come as a surprise. Plus the regulations make specific provision for owners to be able to override any such events, while based on National Grid’s predictions at least, such eventualities will be rare.

You may have heard about Vehicle to Grid (V2G) charging, and be curious as to whether this is the same thing as smart charging. The short answer is no, it is not.

V2G is a technology that can see electric cars collectively act as hive batteries on a national scale, taking on electricity at times when renewable energy is being generated and might otherwise go to waste (EG high winds overnight see turbines generate lots of power), with owners able to sell electricity from EV batteries that drivers don’t want or need back into the grid. V2G essentially sees EVs act as balancing storage batteries.

Unfortunately, V2G only works with CHAdeMO chargepoint connections. This is a type of plug that, while still supported by public chargepoints, has effectively given way to Type 2 connectors, which are now the default plug for almost every EV (aside from the Nissan Leaf), and do not allow for V2G charging.

Nissan Qashqai vs X-Trail: which used car is right for you?
Ford Fiesta (2008-2017) used buying guide
Can you lease a used or second-hand car?
Is there VAT on used and second-hand cars?
Where to buy used cars
How to claim for pothole damage
Head-up displays (HUDs) in cars: what are they?
10 best handling cars
What is a good mileage on a used car?
Find the cheapest petrol prices – UK price comparison. Plus: prices set to fall
Car subscription: what is it and how does it work?
Business car lease vs personal car lease
Company car tax on electric cars explained
10 best cars for long-distance driving
Mini Excitement Pack: what is it and is it worth it?