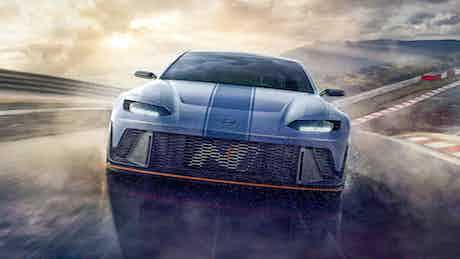 Hyundai has revealed the RN22e concept as a vision of what high-performance EVs from the brand will be like. Read on for all you need to know.

Hyundai has revealed a new performance EV concept called the RN22e. It’s based on the brand-new Ioniq 6, and previews the sort of exciting motor and battery tech that’ll underpin the upcoming Ioniq 5 N high-performance electric car.

The Hyundai RN22e concept has the same 77.4kWh battery as the new Ioniq 6, and it’s powering two electric motors that send their power to all four wheels. Although Hyundai hasn’t said for sure, it’s likely these motors are shared with the 585hp Kia EV6 GT.

Check out the new Hyundai Ioniq 6 in the video below…

Combined, these motors produce 571hp and 740Nm of torque. That’s around 27hp more than the BMW i4 M50. Hyundai hasn’t given a 0-60mph sprint time, but it should sneak comfortably under the four-second mark.

You can expect this setup to make its way into the upcoming Hyundai Ioniq 5 N – a car that Hyundai’s now confirmed will make its debut in 2023.

Don’t expected the Ioniq 5 to match this RN22e concept’s performance (an inevitable result of its higher weight and more boxy design) but don’t doubt that it’ll still be seriously rapid.

The Hyundai RN22e concept is packed with clever features to shave those precious milliseconds off your lap times – important in a modern electric car, right?

The suspension is low and stiff to keep things level through the curves, and the car is fitted with a clever electronic differential to help get the power down more effectively when you accelerate out of tight corners.

This performance concept car is based on the recently revealed Hyundai Ioniq 6 but it’s been given the full boy-racer, sorry, N-Performance treatment.

The most noticeable racy upgrade is the huge rear wing, but don’t let that distract you from the massive air intakes on the sides to cool the brakes. A gaping front grille and some new side skirts (with signature bright-red N stripes) complete the sporty makeover.

The RN22e is just a concept car for now, and Hyundai hasn’t confirmed if it’ll be going on sale in its current form.

However, this car is likely to lay the foundations for the upcoming Hyundai Ioniq 5 N, which you could see as early as next year, and an Ioniq 6 N saloon that may appear later down the line. Expect the upcoming Ioniq 5 N to set you back close to £60,000.

Looking for a great deal on an electric car? Then head over to carwow where our network of trusted dealers will get you the best prices. You can also now sell your car through carwow. It’s quick, easy and you’ll sell for what your car’s really worth.