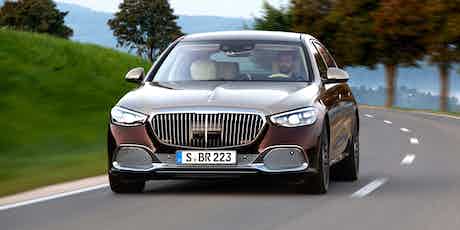 The new Mercedes-Maybach S-Class has been revealed as an ultra-high-tech alternative to the Rolls Royce Phantom and Bentley Mulsanne. Read on for full details on this heavily upgraded S-Class.

A Mercedes S-Class is posh enough for most people, isn’t it? It’s one of the most comfortable, most high-tech, and most desirable cars you can buy, but the new Mercedes-Maybach S-Class could be the perfect car for those millionaires who wants something even more luxurious.

The first thing you’ll notice about the new Maybach S-Class is all that chrome. It’s like the standard car’s been given a pimp-my-ride makeover by a billionaire petrolhead.

Get more info on the Mercedes S-Class

The basic design of the new car is pretty similar to the new Mercedes S-Class, but that huge gate-like grille and vast chrome air intakes are Maybach exclusives.

Another less-than-subtle feature is the Maybach S-Class’s two-tone paint. This isn’t done by a robotic arm with a spray can – It’s all done by hand. And the process takes a whole week to get right because each layer of paint has to be made perfectly level – unlike the pinstripes you get on a Rolls-Royce.

Get more info on the Rolls-Royce Ghost

Let’s face it – if you buy a Maybach, you’re not going to spend much time driving it yourself, are you? You’re going to be sitting in the back, probably buying a new yacht or selling one of your oil refineries. This is why the new Maybach S-Class is a massive 30cm longer than the standard car. It’s even 18cm longer than the extended-wheelbase S-Class.

The new Maybach’s massive rear doors make it very easy to climb in, but they’re also very heavy. Good thing they’re completely automatic, then. And, if you’re feeling especially lazy, there’s a button in the front so your chauffeur can close the doors for you.

And the luxury doesn’t stop there. There are also seatbelt extenders in the back that use laser scanners in the roof to detect when you’re reaching for the belt so they can hand it to you at just the right time.

There’s also a fold-out leg rest with a built-in calf massager. No, that’s not a vet who relieves tension headaches in cattle – It’s a cushion that vibrates to stop your legs from getting fatigued on long drives.

You also get a Champagne cooler between the back seats that’s adjustable. So, you can keep some Champagne perfectly cool at 7 degrees celsius or, if you’d prefer some ice-cold vodka, you can chill it down to just 1-degree celsius.

The new Maybach S-Class is absolutely loaded with screens. There’s a 13-inch touchscreen in the middle of the dashboard and a 12-inch display behind the steering wheel. OK, so that’s the same setup as a regular S-Class, but the Maybach version comes with rose-gold graphics instead. Fancy!

In the back, there are two more 12-inch screens fitted to the front-seat headrests and a third touchscreen between the back seats. This isn’t just some fixed display – you can actually remove it and take it with you and even install android apps on it.

At the moment, you can get the standard Mercedes S-Class with a load of 6-cylinder engines, but the new Maybach S-Class range kicks off with a 4.0-litre twin-turbo V8 petrol engine. Maybach hasn’t said how much power it gets, But you can bet it’ll be just as powerful as the 558hp 4.0-litre V8 you get in the Mercedes-Maybach GLS.

Read all about the Maybach GLS

This engine will also come with a 20hp electric motor, which makes it the first hybrid Maybach S-Class. Ok, so it’s a mild hybrid – not a full-fat hybrid – and it can’t drive around using just electric power. Instead, the motor gives you a boost when you accelerate and allows the car to switch off its engine when you’re cruising.

But, seeing as this is a Maybach, you might as well sidestep the V8 hybrid and get the 6.0-litre twin-turbo V12 model. I’ll be silky smooth and should make more power than the old 621hp V12 Maybach S-Class.

The Maybach S-Class is packed full of sound deadening – much like pretty every other luxury limo. But, filling it with soundproofing wasn’t enough for Maybach, because it also fitted the new S-Class with active noise cancellation.

This works just like a set of posh headphones. So it plays specific notes through the car’s speakers to cancel out wind and tyre noise. Specifically, it uses the subwoofers of the Burmester stereo to play low-frequency sounds that interrupt the sound waves coming from the tyres.

There’s also a new ‘Maybach Mode’ that puts the standard air suspension into its softest setting and programs the accelerator to feel extra gentle. It also tells the nine-speed automatic gearbox change gear at lower revs and, when you pull away, it starts the car in second gear instead of first so it has one fewer gear change once you’re on the move.

The Mercedes-Maybach S-Class is so clever, it might be about to steal your job. Well, if you’re a chauffeur anyway… It comes with a load of sensors and cameras that mean it can pretty much drive itself. At the moment, the system will only engage in traffic. And only below 38mph. Although, this is only allowed in some countries. You’ll probably get fined if you’re caught doing it in the UK!

And it isn’t just chauffeurs who should be worried. The Maybach S-Class could be out to get valet parkers, too. It’s packed full of sensors that let it drive off and park itself in certain kinds of high-tech car park to work.

The new Maybach S-Class is expected to go on sale in early 2021, but it hasn’t confirmed how much it’ll cost. However, the Maybach GLS costs from £150,000, which is £75,000 more than the standard GLS. This means you can expect the new Maybach S-Class to set you back approximately double the price of a standard £75,000 S-Class. Pick a V12 version and you could easily see this rise to £200,000, however.

Compare the best luxury cars on sale now or check out the latest Mercedes S-Class deals available through carwow.