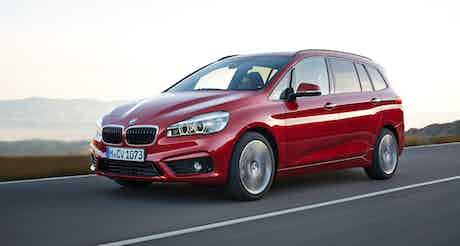 BMW questions its own core brand values by adding a seven-seat, front-wheel-drive MPV to its range

BMW recently made a bold move by introducing the 2 Series Active Tourer to its range. Not only was it the first boxy MPV the German firm has produced, but the range of small, economical engines power the front wheels – until now all BMWs were rear-wheel drive. Now BMW is stretching the 2 Series Active Tourer to create this: the 2 Series Gran Tourer – and it has seven seats. BMW believes it has found another new niche to fill, and it’s true that this is the only seven-seat compact model from a premium manufacturer.

The cabin has been designed very much with practicality in mind. At 4,550mm long and 1,610mm high, the Gran Tourer is 24mm longer and 53mm taller than the regular 2 series Active tourer. Practicality is the first priority, and it’s all aimed at small families who need to lug around lots of kit.

BMW claims that legroom in the second row of seats – which can be moved 130mm fore and aft to improve either load capacity or passenger space – is comparable with that of a luxury car, although though the third row of seats are very much only suitable for children. The seats split 40:20:40 for added practicality, and a higher roof than the regular car makes access easier for all occupants. A wide range of optional extras are offered to personalise the Gran Tourer. A full panoramic glass sunroof will help to make things feel light and airy inside, while sports seats and a full leather interior is available on the top spec Sport and M Sport models.

The 2 Series Gran Tourer will be available with two petrol and three diesel engines from launch. The most frugal is the 216d, which is equipped with a new three-cylinder turbo diesel unit, officially capable of returning 68.9mpg. The two most potent models both have a 0-62mph time of 7.8 seconds, though achieve that result quite differently. The 220i makes use of a 2.0-litre turbocharged unit, producing 192hp and 207lb ft of torque, while the 220d xDrive’s 190hp 2.0-litre diesel sends power to all four wheels. Despite this, it’ll still achieve a claimed 57.6mpg. Each engine is fitted with automatic stop/start, and power is sent to the front wheels via either a six speed manual or an automatic transmission (six gears on the 216d, eight for the others.)

With all of the talk of folding rear seats and large boot openings you’d be forgiven for forgetting that you are in fact reading an article about a new BMW. However, BMW assures us that it will be one of the most engaging cars to drive in its class. Despite the Gran Tourer being only the second front-wheel-drive BMW, the engineers at Munich can draw on experience gathered while developing the Mini range. The body is made from strong and lightweight steels, the car is as wide as possible between the wheels to improve cornering stability, and the centre of gravity has been lowered to make sure the Gran Tourer is as agile as possible.

A whole range of acronyms are included with the Gran Tourer, including ABS (anti lock brakes) DCT (dynamic traction control) and EDLC. Electronic Differential Lock Control is capable of braking the front wheels independently from one another to reduce the typical front wheel drive understeer (wheels pushing wide in a corner), particularly when accelerating hard out of a tight bend.

At the premium end of the market, the BMW doesn’t have any direct competitors. However, the likes of the Volkswagen Touran will offer similar levels of quality at a lower price, while the BMW will do well to match the Ford S-Max for driving enjoyment. To our eyes, neither look as awkward and ungainly as the BMW, either – though you may beg to differ.