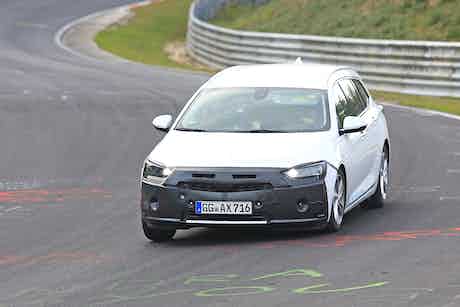 Following Peugeot’s acquisition of Vauxhall, our spies have captured a facelifted version of the Vauxhall Insignia Sports Tourer. Read on for the car’s price, specs and release date

A facelifted version of the Vauxhall Insignia Sports Tourer has been spotted testing at the Nurburgring in Germany. It’s set to get more striking looks, a revised interior and could also get engines from its new parent company, Peugeot.

The 2020 Vauxhall Insignia Sports Tourer is a facelift rather than an all-new model so expect prices to remain broadly the same as the current car, which starts from £18,000 and goes up to more than £35,000 for a top-of-the-range version. The Vauxhall won’t go on sale until the end of next year and is an alternative to estate versions of mainstream family cars such as the Ford Mondeo, Volkswagen Passat estate and the Skoda Superb.

While radical change isn’t on the cards for the 2020 Vauxhall Insignia Sports Tourer you can expect it to get a more distinctive front end than the current model, with kinked headlights and a sharper grille. Around the sides you’ll spot a range of new alloy wheels designs but little else, while the back will get a similar treatment to the front with revised tail lights and a refreshed bumper.

The story inside will be similar to the one told outside – you’ll see minor improvements but nothing radical. That’ll take the form of some revised interior trims, improved plastic quality and a restyle for the centre console. The biggest change will likely take the form of, er, bigger infotainment screens. Those could include a full 12.3-inch digital display to replace the conventional dials you’ll find behind the steering wheel.

Peugeot’s recent purchase of Vauxhall sparked speculation that the former’s 1.2-litre three-cylinder PureTech petrol engine would see service in the Insignia, but we have it on good authority that will not be the case. Instead expect to see lightly revised versions of the engines current available, which cover everything from a

Bookmark this page for more news on the Vauxhall Insignia Sports Tourer when we get it.