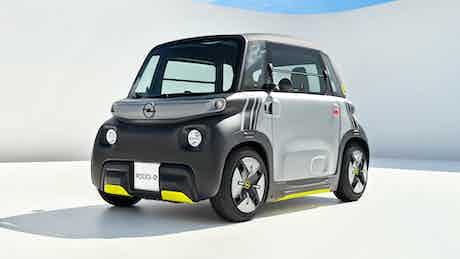 The Opel Rocks-e is a tiny little electric city car that even a 15-year old car drive. Unfortunately, it isn’t destined for the UK. Read on for full details.

The Opel Rocks-e is a minuscule little city car based on the Citroen Ami. It offers two seats and just enough range and power for short trips around a city or suburb.

It will initially go on sale in Germany this Autumn – where 15-year olds with a light motor vehicle license can legally drive it- extending to other markets in 2022. There are no plans for it to come to the UK as a Vauxhall, though.

There are small cars, city cars and small city cars. Then there is the Opel Rocks-e, at 1.39 metres wide and 2.41 metres long this diminutive little car is 0.285 metres shorter than a Smart EQ fortwo and over a metre shorter than a ‘regular’ city car like a Kia Picanto.

A set of large black bumpers dominate the front and rear of the car, with tiny 14-inch wheels at each corner. The doors are as almost as wide as the wheelbase and the driver’s door is rear-hinged. Funky yellow detailing under the door sills and bumpers offset the black and grey colour of this particular example.

The cabin offers the bare minimum of features, with a small digital driver display and a place on the dashboard to mount your phone.

There is a handy storage area running the length of the dashboard and the passenger footwell is extra deep, doubling as a storage area for shopping bags. Colourful door straps and hinged windows that fold outwards are about as luxurious as it gets.

The Opel Rocks-e shares its mechanical and electrical bits with the Citroen Ami. That means an 8hp electric motor coupled to a 5.5kWh battery pack which provides up to 48 miles of range.

This is marginally up on the Ami’s 44 mile range, likely as a result of the Rocks-e weighing a few kilos less.

A top speed of 28mph should be plenty for getting about crowded city streets or to nip down to the shops. The benefit of having such a small battery pack is that it can be fully recharged from a standard household socket in around 3.5 hours.

The Opel Rocks-e will be hitting the streets in Germany this Autumn, sales to other markets will commence in 2022, but that doesn’t include the UK. The Citroen Ami is a virtually identical offering that may also be offered in the UK in the near future.

It costs the equivalent of around £5,500 in other markets, so expect the Opel Rocks-e to be similarly priced.