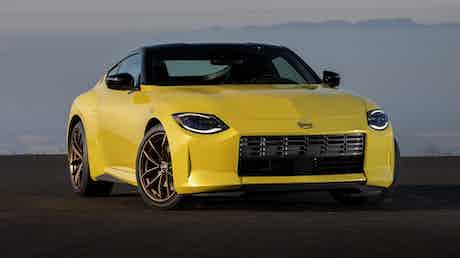 Nissan’s long-awaited next-gen Z sportscar has finally arrived with a retro-inspired design and a 400hp twin-turbo V6 engine. Read on for everything you need to know about this new sports car.

Best sports cars 2021
This is the new Nissan Z — a replacement for the long-lived 370Z. It comes packed with a twin-turbo V6 producing 400hp, just that the thing to make it a desirable alternative to cars as varied as the Porsche Cayman, Toyota GR Supra, BMW Z4 and Audi TT.
Before you get too excited though, it won’t be coming to the UK…

Few cars these days stay true to their initial prototype designs, yet the new Nissan Z is as close to the original Z Proto design study as to be practically indistinguishable. The long bonnet with its raised centre section and broad front air intake look modern while paying homage to the classic 240Z that was the very first in the model line.

The smoothed-off side profile accentuates the car’s sporty stance, just like in the outgoing 370Z. The taillight cluster and raised rear bumper bear a strong resemblance to the ‘90s 300Z while still looking thoroughly modern. Everything from the roofline to the door handles has this ‘vintage yet modern’ look to it which makes the Nissan Z oddly familiar yet totally contemporary at the same time.

The nod to the Z’s predecessors continues in the cabin. Three analogue binnacles mounted atop the dashboard are pure Z car, although there is now an 8.0-inch infotainment touchscreen (9.0-inches on the top Performance trim) and a customisable 12.3-inch digital meter display to bring this latest model into the modern era.

The door handles and steering-wheel design all bring to mind the design aesthetic of earlier models, too. Standard interior colours include black, red and blue, with the Z Proto Spec edition model getting yellow accents and stitching.

All Z models come equipped with a new 3.0-litre twin-turbo 400hp V6. It’s said to be quicker to 60mph than 370Z, and should be near the 4.5-second mark, in line with other two-door sports cars like the Toyota GR Supra and Audi TT. Unlike most alternatives though, the Nissan Z will be offered with a six-speed manual transmission as well as a nine-speed automatic.

The handling and braking are said to be a big improvement over the 370Z, however the traditional front-engined rear-wheel-drive layout (with standard limited-slip differential) have been retained which is the preferred setup for many driving enthusiasts. Performance trims get larger front and rear brakes.

The seventh-generation Nissan Z will be reaching US dealers in the spring of 2022 as a 2023 model. There are no plans at this time to offer it for the European market, seemingly due to concerns about ever-stricter emissions regulations.

It will be offered in Sport and Performance trims, as well as a special edition model called the Z Proto which will be limited to just 240 units – this figure pays homage to the original 240Z. Pricing for the US market should be in line with the similarly powerful Toyota GR Supra, which would put starting prices around the $45,000 mark.

Head over to our Nissan deals page to see the latest offers or check out the best new sports car deals available through carwow.