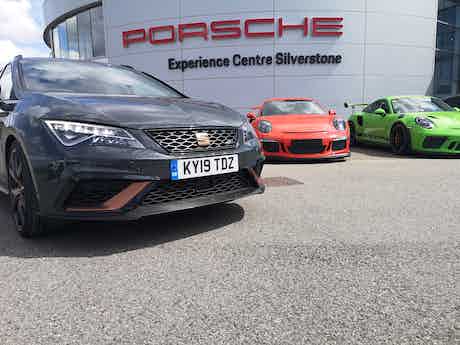 Our SEAT Leon Cupra ST R ABT is phenomenally fast on road, but how does it shape up to being thrashed around a track? News editor Russell Campbell took it to Silverstone to find out…

Rocking up to the Porsche Experience Centre at Silverstone in a SEAT estate, even one with 350hp, is one way to blow the wind out of your sails.

Pretty much every Porsche imaginable is scattered about Porsche’s UK Grand Prix premises, covering everything from Macans and Cayennes to Boxsters, Caymans and 911s. You’ll even see Le Mans racers there, although, disappointingly, closer inspection reveals they’re just full-sized models.

Clearly, we weren’t here to drive Porsches though, because our invite came from Cupra. SEAT’s sporty spin-off brand had invited us along to give our Leon R a thorough going-over on the Porsche centre’s mix of twisting handling circuits, scintillating straights and low-friction surfaces.

Our day began on what turned out to be the most exhilarating of the centre’s box of tricks: the intriguingly named kickplate. An endearing combination of a soaking wet, slippery surface with a hydraulic ram built into the Tarmac, it does exactly what it says on the tin – quite literally kicking our SEAT’s back end into grin-inducing oversteer.

The idea, of course, is to control it and, with the help of our instructor for the day – a man who clearly likes a challenge – we eventually did. Getting opposite lock applied (or turning into the slide) ASAP is key, as is looking where you want to go, not where the car happens to be pointing. Keep your aim true and your hands will naturally point the steering in the direction needed to regain composure.

Next to the handling circuit. Observation has never been a strong point of mine and it took our man from Porsche all of half a lap to pinpoint this weakness. Instead of looking 20m ahead, as I was, 200m is the golden figure allowing you a much wider field of vision and significantly more time to prepare for what’s coming your way.

On track, this way of doing things transforms snatching, reactionary adjustments into flowing inputs that let you mentally prepare for the next corner before you’re even halfway through the first.

Well, that’s how it felt. Until our instructor suggested a five-minute cool down and an observation session from the passenger seat. Tyre squeal is all very well, but it does not equal fast progress and, sitting shotgun, with no steering wheel to cling on to, it feels ragged.

Vision is something I’ll need to work on because retraining a brain that’s been ingrained with bad habits over the years takes time.

That was the last lesson on a day that didn’t last long enough and was crammed full of eye-opening experiences. But, if there was an overall lesson, it’s that – with their huge grip, astonishing performance and flattering electronics – the limiting factor in most modern performance cars is the bone, skin and brain matter sitting behind the steering wheel.

That’s certainly the case for our SEAT, which despite being a wholly practical family car, never fails to astound us with its explosive performance, laser-like fast and precise DSG gear changes and claw-like traction. Its time on track did nothing to dampen our enthusiasm for its abilities.

The trouble is, at £170 a pop for 90 minutes of tuition, getting your abilities anywhere near the talents of the car isn’t going to be a cheap process.

If you’ve been following our long-term review of the Cupra Ateca, you’ll know that, for all its strengths, it failed to win us over as a practical family car that was genuinely entertaining to drive. Its raised suspension and high centre of gravity left us feeling detached from the road, even if it was quick enough to show a Golf R a clean pair of, er, wheels.

This got us thinking, could there be a better option, a car that’s completely practical but also an utter riot to drive when the opportunity presents itself? Something like this SEAT Leon Cupra R ST, perhaps?

It certainly looks more interesting than the somewhat confused tribal-badged Cupra Ateca. The Leon R is the most focussed car SEAT (or indeed Cupra) builds and, as a result of a carbon-fibre body kit and unique shades of paint – Blackness Grey metallic in the case of our car – it looks it. The accompanying bronze highlights might sound like a terrible idea but, in the metal, they work.

This is just as well because you get more bronze trim on the inside. The only other distinguishing feature is the Alcantara steering wheel which looks great – infinitely better than the dodgy ‘carbon fibre’ trim on the insides of the doors – and is lovely to hold. Like the regular Leon Cupra, you also get a pair of body-hugging sports seats that strangely do without lumbar adjustment.

So the style box is ticked inside and outside, how about practicality? Well, yeah, it’s got plenty of that. All Leon’s can happily carry four adults and this being the ST estate you also get a boot that can swallow a set of suitcases or, with the back seats folded away, a bike with its wheels attached.

This all sounds a bit sensible, doesn’t it? But you needn’t worry because the standard R pumps out a healthy 300hp and for an extra £500 you can send it German tuners Abt (thankfully, they’re franchised in the UK) who’ll liberate another 50hp courtesy of a software flash and a new exhaust. Naturally, that was the first thing we did.

The result? Well in combination with its grippy four-wheel drive system and quick-shifting dual-clutch seven-speed gearbox the Leon can now (quite literally) launch itself from 0-62mph in 4.5 seconds. Which, astonishingly, is a tenth of a second quicker than a manual Porsche 911 which costs nigh on twice as much. And has space for two fewer people and half as much stuff.

So our ‘sensible’ estate car has eye-catching looks and the performance to smash Stuttgart’s finest, could the SEAT Leon Cupra R be the most well-rounded car on sale in the UK? We reckon it’s in with a shout and we’re very much looking forward to our next three months with the car.

In the meantime, keep your eyes peeled to the carwow YouTube channel, because we suspect the Leon could be a rising star in Mat’s drag races.