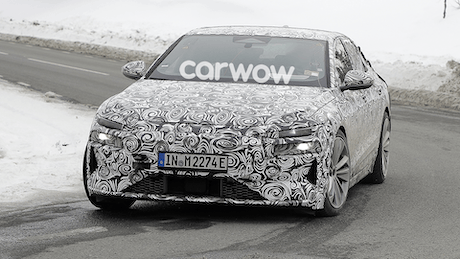 Prototype versions of the upcoming Audi A6 e-tron electric car have been spotted, following the recent reveal of a new Avant estate concept. Read on for full details.

Prototype versions of the upcoming Audi A6 e-tron have been spotted, less than a week after Audi revealed a new A6 Avant e-tron estate concept (watch the video below to check out that car).

The new Audi A6 e-tron is set to go on sale in 2023 as an alternative to the Tesla Model S and the Mercedes EQE.

It was just a few days ago that the Audi A6 Avant e-tron Concept was unveiled, which carried over much from a saloon concept that was revealed last year (shown above).

Check out the latest Audi A6 deals

Neither the concept (above) nor the new prototype (below) looks anything like today’s Audi A6 – it’s up to you whether that’s a good thing or not.

At the front, you can spot some ultra-thin daytime running lights peeking through the prototype’s camouflage above some larger main beams – much like the setup BMW teased for the upcoming 7 Series and i7 electric car.

The lowermost grille looks taller than the concept car’s, but this could be a case of clever camouflage deliberate masking the final design.

One thing that hasn’t changed over the concept version of the saloon is the eye-catching side profile.

This is a long car — perhaps a little longer than the current Audi A6 – but its curved roofline is more like the sleek Audi A7’s.

Concept versions had a sleek LED light bar across the rear, but this prototype seems to be using a split set. These may have been fitted to mask the finished car’s design or they could be a sign that Audi’s changed the design of the concept’s backside.

Concept versions of the Audi A6 e-tron use a 100kWh battery with 435 miles of range. You can expect the finished car to get close to these figures.

It could also support up to 270kW fast charging, allowing you to recoup 186 miles in just 10 minutes.

It’s expected the road-going version of the Audi A6 e-tron will come with multiple motor options.

Long-range versions are expected to use a single motor driving the rear wheels.

High-performance versions should use a dual-motor setup with as much as 476hp and 800Nm of torque. These will come with four-wheel drive.

The Audi A6 e-tron is set to hit the market in 2023, both as a saloon and an Avant estate.

Keen to get your hands on a new EV? Take a look at the latest electric cars on sale now, including the Audi e-tron SUV