What is an electronic handbrake? 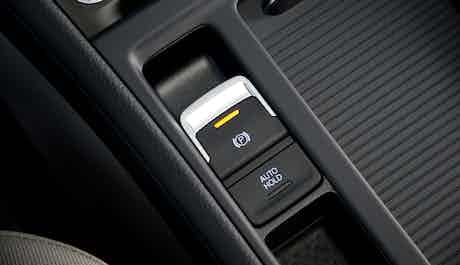 Car manufacturers constantly strive to make driving as easy as possible. As such, the electronic parking brake is becoming increasingly more common in new cars, replacing the traditional handbrake lever with a button. This is carwow’s guide to how they work and what they’re like to live with.

How does an electronic handbrake work?

The traditional handbrake lever tensions a cable when it’s pulled up. That cable squeezes the car’s rear brake pads or shoes onto the brake discs – or drums – holding the car firmly in place. Some cars have a separate disc and pads on the rear axle specifically for the handbrake.

Whatever system a car uses, the principle remains the same: pulling the lever locks the rear wheels so that the car won’t move when you don’t want it to.

Electronic handbrakes – sometimes called electronic parking brakes – work on the same basis but use electric motors to achieve the effect. Press or pull the button and motors on the rear brakes press the pads onto the discs. You can often hear a reassuring whirring noise as the motors do their work.

Most electronic handbrakes disengage automatically when pulling away. In a car with a manual gearbox, it’ll release as you bring the clutch up past the biting point and press the accelerator. There is no industry standard for how much ‘gas’ a car needs to release the ‘brake – some will release with barely a tickle of the accelerator, others need quite a lot of revs.

As a result, driving a manual car with an electronic handbrake can take some getting used to. The feeling of the car tensing at bite can be quite pronounced, and the release can feel pretty severe. You might find yourself stalling as you get used to it.

Electronic handbrakes are much easier to use in cars with automatic gearboxes – they simply disengage when the accelerator pedal is pressed.

Some cars have a ‘hill-hold’ function with their electronic handbrakes. This detects when the car is stationary on a slope and holds the brakes without the driver having to engage the handbrake. This allows a quicker getaway, as you just drive off normally.

Some cars also have a switch for the handbrake built into the brake pedal – VW Group models in particular. To activate the switch, simply press the brake pedal as far it will go once stationary – you’ll feel a bit of resistance right at the bottom of the pedal’s travel as you hit the switch itself.

Obviously, you can engage the handbrake manually by operating the switch. Some cars engage the ‘brake automatically when you turn the engine off, others don’t – a warning will sound if you forget.

What are the drawbacks of electronic handbrakes

Apart from the ‘drivability’ issues discussed above, the main potential issue is that electronic handbrakes make DIY brake changes impossible. You need a specialised – and expensive – diagnostic computer that instructs the brake calipers to open enough to extract the discs and pads.

You can’t do handbrake turns, either. Not that we’d encourage that sort of thing!

If you want to see Mat having some fun with traditional handbrakes, check out the video below.

Are they worth it?

Electronic handbrakes are more reliable than a mechanical system, free up space for storage in the centre console and remove some of the complications from the driving process. They may take a bit of getting used to, but we think the benefits more than make up for that.

What next?
Read reviews of popular cars that can come with electronic handbrakes: