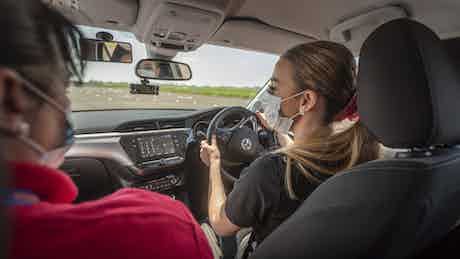 The hazard perception test is a very important step to take in your journey to getting your full driving licence. It’s a measure of how alert to your surroundings you are – after all, a more aware driver is far less likely to have an accident.

For some learner drivers, the hazard perception test can be quite daunting, but at its core it’s quite straightforward: you watch a series of video clips showing different everyday driving scenes, and you point out any potential hazards (usually by clicking a computer mouse button) that you spot.

You’ll have 14 clips to watch, and you’ll get up to five points for every hazard you identify. Because one clip will have two hazards in it, that means there are 75 points up for grabs in the hazard perception test. As long as you score 44 points or more, you’ll pass the test (though do remember you need to also pass the separate multiple-choice questionnaire in order to pass your theory test).

To help you prepare for your upcoming test, read on for our tips and FAQs on how to pass your hazard perception test with flying colours.

Our 6 tips to pass your hazard perception test are:

Tip 1: Know what a hazard is

It goes without saying, but knowing what a hazard is will help you a lot when you take your hazard perception test, as knowing what to look out for is most of the battle.

In the hazard perception test, you’ll be asked to identify what’s referred to as a ‘developing hazard’. In layman’s terms, this is essentially a hazard that will require you to slow down, stop or steer out of the way.

For example, a car parked on the side of the road isn’t a developing hazard. However, if the indicator light starts flashing and the car starts to move away, that would be a developing hazard as you would need to slow down in order to avoid a collision with it.

While they won’t necessarily contain the same scenarios that will feature in the hazard perception test when you take it, they will give you an idea of what to look out for and help hone your awareness skills. These mock tests also help familiarise you with how the test works, so you’ll hopefully be more comfortable and at ease when you take it for real.

Tip 3: Be on the lookout

While the hazard perception test consists entirely of video clips, that doesn’t mean you have to always be in front of a screen when preparing for the real test. You can also keep your eyes peeled for hazards when you’re out on the road, whether that’s when you’re driving yourself or as a passenger.

What hazards you’ll encounter, if any, will vary depending on the traffic levels and behaviour of other road users – in some instances, you may not see any at all. However, it can get you in the habit of being aware of your surroundings and developing situations. This will not only put you in good stead for the hazard perception test, but will also benefit you when you eventually get your full licence.

When you take your hazard perception test, it can be tempting to simply click on everything that may or may not become an obstruction you’ll need to avoid. However, the DVSA has thought ahead on that, and put in place measures to stop you from trying to beat the system.

How to pass your UK driving test

For example, if you click too many times, you will automatically fail that part of the test and score zero points – making it even harder for you to pass your hazard perception test and, by extension, your theory test. Likewise, clicking in a regular pattern will also result in nil points for that particular clip.

Tip 5: Look out for road signs

Tip 6: One clip will have two hazards, not just one

Of the 14 clips you’ll watch in your hazard perception test, 13 of them will only have one hazard in them. However, one will instead have two hazards for you to identify, meaning you can earn up to 10 points for this clip rather than the usual five.

There also won’t be any advance warning for when this two-hazard-video is playing, so make sure you keep an eye out for hazards in all of the clips when you take your test in full.

How does the hazard perception test work?

How many hazard perception clips are there in the test?

In total, there will be 14 short video clips in the hazard perception test. 13 of them will have one hazard in them, while one of the clips will contain two hazards for you to point out.

How many points do you need to pass the hazard perception test?

How long is the hazard perception test?

The exact length of the test will depend on how long the clips that you’ll be assessed on are. However, by and large, it shouldn’t take more than 20 minutes for you to complete the hazard perception test.

How many times can you click on the hazard perception test?

You can click as many times as you want on the hazard perception test, though it’s not advised to click too frequently. This is because the system may register your repeated clicks as an attempt to cheat, which will result in you scoring nothing for that particular clip.

Looking for the easy way to change your car? Then head over to carwow. You can sell your car, and get a great deal on a new one, all through our network of trusted dealers without leaving the house. Tap the button below to get started today.