Smart motorways – what are they, how safe are they, and why do they exist? 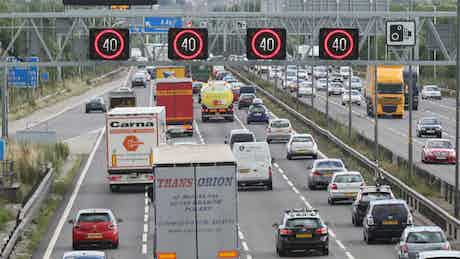 The UK’s motorway network has been transformed by the introduction of smart motorways, but what are these controversial roads, and what are their pros and cons?

‘Smart’ has become a bit of a buzzword in recent years. First there were smartphones, then came smart TVs, smart fridges, smart watches – and much more besides.

It wasn’t long before road planners got in on the action, with the UK’s first smart motorway appearing in 2006 – although the technology behind the roads existed before then. Today, smart motorways represent about 15% of our 2,300-mile motorway network, with around 375 miles of such roads having been built by the start of 2021.

But smart motorways have been dogged with controversy almost since the day they started appearing, and the safety of these roads has been the subject of countless newspaper articles and TV news pieces, as well as government investigations and ‘stocktakes’.

What is a smart motorway

Smart motorways feature a variety of technologies that aim to reduce congestion without the road having to be expanded or rebuilt at great expense. Smart motorways tend not to be complete lengths of individual motorways, but rather specific sections of existing road.

Not all smart motorways have the same set of systems, but the technologies featured include:

There are three different types of smart motorway, and each works in a slightly different way.

These types of smart motorway have a hard shoulder that can be turned into a live traffic lane by electronic road signs when traffic is heavy and more road capacity is needed. By default the hard shoulder is not a live lane, though, and it must only be driven on when signs indicate it should be. The M1 between Junctions 10 and 13 features a dynamic hard shoulder.

Controlled motorways have a permanent hard shoulder but feature variable speed limits, which are set depending on traffic conditions.

Although it wasn’t called such at the time, the first section of smart motorway technically appeared in 1996 between junctions 10 and 15 of the M25, when sensors in the road were introduced to measure traffic levels, and algorithms used this data to set variable speed limits enforced by speed cameras. This was an example of a controlled motorway back a quarter of a century ago and it remains one now, except it has now been extended to Junctions 10 to 16, while other sections of the M25 are also controlled motorways.

Why do smart motorways exist?

Motorways are the safest type of road in the UK. Government statistics show there were 49 accidents for every billion miles travelled on motorways in 2020, but 350 accidents – six times as many – per billion miles driven on A roads.

The inherent safety of motorways means road bosses want people to use them, but motorway congestion not only costs money in lost productivity, but can see drivers divert onto other, more dangerous types of road.

Building new motorways or widening existing ones to take more traffic is extremely expensive. Utilising the hard shoulder – either permanently, or temporarily when traffic volumes are high – creates extra capacity while costing roughly 60% less than motorway widening. Plus some motorways cannot be widened because they run past towns and cities, or close to geographical features such as rivers, or steep hills and mountains.

Motorway drivers have become used to having hard shoulders over the years, and there can be a significant impact to their removal in terms of drivers’ perceptions of risk.

Smart motorways are, according to their critics, more dangerous than conventional ones, while a number of high-profile collisions on smart motorways have made headline news.

The roads have also received improvements – although some have argued these should have been in place as soon as smart motorways were first introduced.

The DfT’s stocktake on smart motorways concludes: “Overall, the evidence shows that in most ways, smart motorways are as safe as, or safer than, conventional motorways, but not in every way.”

Either way, in January 2022 the government paused the rollout of new all lane running smart motorways for five years so more data about their safety can be gathered; the introduction of new dynamic hard shoulder smart motorways was also previously paused. This will not reverse smart motorways that have already been built or are in the process of construction, though.

How to drive on a smart motorway

Smart motorways do bring some additional rules, though:

What to do if you break down on a smart motorway

The prospect of breaking down on a motorway without a hard shoulder is frightening, but there are a number of things to bear in mind about this scenario.

The first is that cars tend not to spontaneously fail, often giving warning signs (such as a flashing engine management light, or a loss of power) before they stop working. A car travelling at 70mph can also often cruise for a significant distance should the engine fail, potentially allowing you to get to a refuge area if there is no hard shoulder.

National Highways, the organisation that runs the UK’s motorway network, advises drivers to do the following in an emergency:

Go left, coming off at the next junction if possible, or moving across the motorway to the hard shoulder or nearest refuge area. Once there, occupants should leave the car from the passenger side and get themselves behind the crash barrier and on to the verge, standing behind the car rather than ahead of it.

Drivers who break down in a live lane should stay in the car with their hazard lights and seatbelts on and dial 999.

Which motorways are smart motorways?

The following list was drawn from a map published by National Highways in 2021. Sections marked * were under construction at time of publication.