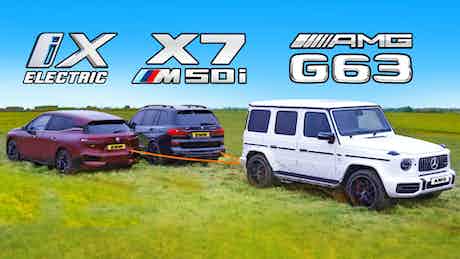 What sort of pulling power can you get from an electric SUV? Today we’re going to answer that question in the most carwow way possible, with a tug of war.

Mat’s going to start off today in the BMW iX M50. It has two electric motors providing drive to all four wheels. Combined, they put out 523hp and 765Nm of torque. The iX weighs in at a whopping 2,510kg, which may actually prove useful for traction, and it has a towing capacity of 2,500kg.

It’ll be interesting to see which of these two cars coms out on top, especially seeing as the winner of this tug of war will be taking on a new challenger: the mighty Mercedes-AMG G63. You’re looking at a proper off-roader here with a ladder frame chassis and three locking differentials. The big G weighs in t 2,560kg, and under the bonnet lies a 4.0-litre twin-turbocharged V8 with 585hp and 850Nm of torque.

Which of these three SUVs will come out on top? You’ll have to watch the video to find out.

Looking for an easy way to change your car for an SUV? Then head over to carwow, where you can build your ideal car and compare the best offers from our trusted dealers. You can also sell your car through carwow quickly and easily, and you’ll get a great price as well.