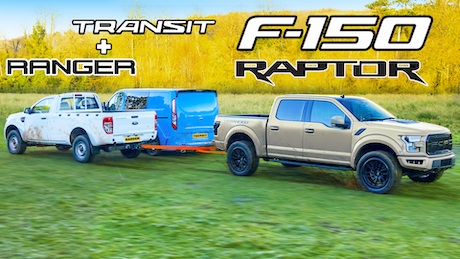 A stream of Fords competes to see which can be crowned the carwow tug-of-war champion.

Representing America is the Ford F-150 Raptor. This colossus is powered by a 3.5-litre twin-turbocharged V6 kicking out 450hp and 691Nm of torque.

With a kerb weight of 2,584kg, it’s going to take some might to pull this Raptor.

Squaring up to it is a more familiar sight on European roads. The Ford Ranger doesn’t quite have the might on paper — with 170hp and 420Nm from its 2.0-litre diesel engine, and weighing just 2,018kg. Though it could always throw up a surprise.

Yet even more familiar is a third competitor, the Ford Transit. This also uses a 2.0-litre diesel engine, kicking 184hp and 415Nm of torque. It’s heavier than the Ranger too at 2,236kg.

Unlike both the Raptor and Ranger though, which are all four-wheel-drive, the Transit is front-driven which could prove a disadvantage.

Which comes out on top of this battle? You’ll need to watch to find out…