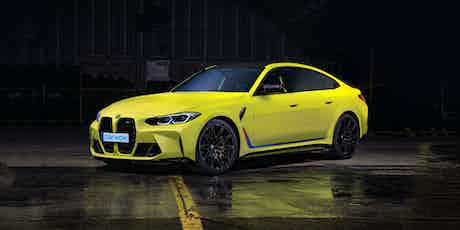 A high-performance M version of the all-electric BMW i4 could be on the way, possibly with three motors and 720hp. Read on for more details.

The BMW i4M could be the German manufacturer’s first all-electric full-fat M car and may be revealed in 2022. This new car could come with 720hp thanks to a triple-motor setup. Our exclusive render imagines what the new i4M could look like.

Expect the BMW i4M to merge the design of the recently-revealed i4 with that of the high-performance M4 coupe, as imagined in this image. That would mean the huge grille as well as large air intakes on either side up front, with swollen rear arches.

BMW’s electric car range does get some blue styling tweaks, but the i4M may opt to use M-coloured elements instead. There’ll be no need for the trademark quad-exit exhaust at the rear of the car though, however it’ll still likely feature an aerodynamic diffuser-style bumper trim.

A future i4M would take the standard i4’s interior (shown above) and add bundles of ‘M’ goodies, including a new steering wheel, more supportive seats and the obligatory M-coloured red, blue and purple stitching.

There’ll no doubt be a huge touchscreen, with some extra performance-oriented upgrades thrown in. These could include lap timers or information on the car like G-force data and acceleration times.

It’s likely the BMW i4M would retain the same battery pack as the i4, albeit with dual- or maybe even a triple-motor setup. The German brand has confirmed the new i4 will be available with 544hp in i4 M50 guise, but a full-blown M version could come with significantly more.

BMW has confirmed it’s been testing an electric 5 Series saloon with a triple-motor drive system that could be fitted to the upcoming i4M. This test car (shown below) uses one motor to drive the front wheels and two to drive the rear wheels.

Together, they produce a total of 720hp, which is enough to blast this prototype from 0-60mph in ‘comfortably less than three seconds’ – it’s possible the finished i4M could be even quicker.

Whether the new i4M electric car comes with this fancy three-motor setup or not, you can bet it’ll get a load of suspension tweaks over the standard i4 EV. These will help it deal with all the extra power its motors will produce, and counter the extra weight of heavy batteries that conventional petrol-powered M cars don’t have to deal with.

This extra performance could mean the i4M can’t quite match the standard i4’s 300-mile range, as is the case with the Tesla Model 3.

The ‘Performance’ version of that car loses out on a few miles of range compared with the Long-Range car.  You can, however, expect the i4M to manage at least 250 miles according to the latest WLTP testing procedures.

It’s possible the BMW i4M could be revealed next year, with production starting later in 2022. If it turns out that the upcoming i4M gets a 530hp dual-motor setup, you can expect it to cost from around £80,000. If, however, BMW fits the full-fat 720hp triple-motor system from its ‘Power BEV’ test car, the i4M could end up costing closer to £100,000.

Can’t wait for the BMW i4M? Take a look at deals on the BMW M3 and M4 or compare the top 10 best electric cars currently on sale.