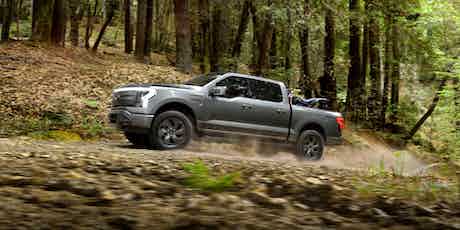 That’s right, the ultra-American Ford F-150 has gone electric. Read on to find out all about this new F-150 Lightning EV…

You’ve read that right, the most American truck out there has gone all-electric. This is the new Ford F-150 Lightning — a dual-motor truck with as much as 300 miles of range on offer.

It’s an alternative to the GMC Hummer EV, Tesla Cybertruck and Rivian R1T, and will cost around $40,000 before state taxes and EV discounts are taken into account. It’s unlikely to reach the UK, though.

How do you make your electric truck look, well, electric? In the case of the Ford F-150 Lightning, you give it a huge LED daytime running lightbar at the front with an equally wide brake light at the rear.

Other changes to the design compared with the standard F-150 include a smoothed-out front grille, which makes sense considering there’s no engine to cool. As a result, the Lightning’s the most aerodynamically efficient Ford F-150 ever. Although that’s not saying much…

That name ringing a bell? Well, the Ford F-150 Lightning was once a V8-powered performance version of the F-150 pick-up truck.

Now it’s something of a cheesy reference to its electric power. Ford hasn’t said how large the batteries in this EV are, though it will offer ‘Standard’ and ‘Extended’ range versions. The former will be able to cover up to 230 miles on a charge, with the latter capable of 300 miles.

That’s assuming you’re not carrying anything. You’d suspect if you maxed out the 907kg payload, that would drop a bit.

Every version of the Ford F-150 uses a dual-motor setup, with one on either axle for an all-wheel-drive setup.

The Standard truck gets a healthy 432hp, though that’s cranked up to 571hp in the Extended Range version. Both have a colossal 1,050Nm of torque, though. Queue the train towing videos on YouTube…

Official performance figures are yet to be released, but Joe Biden, you know, the President of the United States, had a go in a prototype and said it could do 0-60mph in ‘4.3 or 4.4 seconds’.

Although the interior of the Ford F-150 Lightning is the same as the standard truck at its core, it does get a couple of cool upgrades.

The literal biggest is a new touchscreen infotainment system, measuring 15.5-inches — quite the increase from the standard 12-inch system — which supports Android Auto and Apple CarPlay, and has Amazon Alexa built-in.

There’s also a 12-inch digital driver’s display rather than analogue dials. How modern.

The Ford F-150 Lightning is equipped with ‘BlueCruise’ tech. As well as ringing bells of the Blue’s Clues children’s TV show, it’s like Tesla’s Autopilot system — capable of accelerating, braking and steering for you on certain roads.

There is a sensor on the dashboard to make sure you’re paying attention while you’re using it though, so don’t think it’ll let you slack off behind the wheel.

The Ford F-150 Lightning electric truck goes on sale in 2022, though you can reserve one now — as long as you’re in the US.

It’s unlikely to come to the UK officially, but you never know…