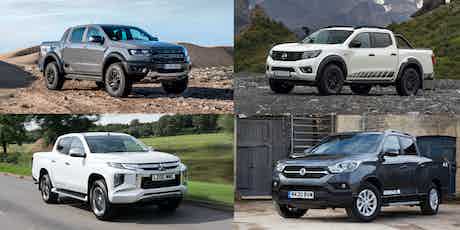 You won’t find many more versatile, capable vehicles than pickup trucks. Whether you’re looking for a serious off-roader, a towing workhorse or even a family 4×4 that doubles as a van, there’s plenty on the market that can fit the bill.

It wasn’t too long ago that pickups were agricultural, noisy commercial vehicles that were as well appointed as an allotment shed. But recent efforts have gained much in terms of creature comforts, safety and refinement – so much so that private buyers are lapping them up in favour of posher, pricier 4x4s.

While a conventional large family car or SUV is still nicer to drive and sit in, the pickup trucks on sale today are comfy enough to be pretty useful for day-to-day driving. This is especially the case if you decide to go for a higher-spec version with all the bells and whistles thrown in.

If you’re seriously considering a pickup truck as your next new daily driver, check out carwow’s guide below on the best pickup trucks that are currently on sale.

The Ford Ranger has been the UK’s best-selling pickup truck for a number of years now, so it’s no surprise the Ford makes a great choice if you’re shopping around for a new pickup.

It’s especially worth considering if you regularly haul heavy loads, as all Ranger variants can carry a payload of at least 1,024kg, and towing capacities range from 2,500kg to 3,500kg depending on the engine you specify.

Better still, the Ford Ranger has more going for it than its hardy workhorse credentials. It’s fairly comfy and fun to drive by pickup truck standards, and equipment levels are decent across the board, too. Some rivals do fare better when it comes to interior build quality, though.

As a rule of thumb, if you want a pickup truck with the best possible towing capacity, you’ll need to go for the most powerful version. However, the Toyota Hilux is an exception to that rule – it can tow up to 3,500kg and haul a 1,000kg payload, regardless of whether it has the 150hp 2.4-litre or 204hp 2.8-litre diesel engine.

As is par for the course for a pickup, the Toyota Hilux has a hardy interior, though it does come with a decent amount of creature comforts (especially if you opt for the mid-range or higher-spec models). Just be aware that, because it has stiff suspension, the ride can be quite bumpy even by pickup truck standards.

Even though Mitsubishi will stop selling cars and commercial vehicles in the UK in 2021, its L200 is still worth bearing in mind if you’re shopping around for a new pickup.

Thanks to its blend of a decently potent diesel engine, standard-fit all-wheel drive and its maximum towing capacity of 3,500kg, the L200 ticks all the right boxes if you’re after a versatile load-lugger.

A word of warning if you’re after a plush pickup truck: the Mitsubishi L200 doesn’t have the swankiest of cabins, and the base versions don’t come with a huge amount of kit. That said, it does have enough safety equipment to warrant a pretty good four-star safety rating from Euro NCAP.

Many pickup trucks tick a lot of boxes as rugged and dependable cargo carriers, and the Nissan Navara is no exception. Like many of the trucks on this list, it’s capable of hauling hefty loads of up to 3,500kg, and all versions of the Navara have payload capacities in excess of 1,000kg.

Factor in the standard-fit all-wheel-drive system, and the Nissan makes a lot of sense if you’ll be using it at work on a farm or building site. If you’d be using the Navara for private use, you’ll be pleased to know it’s surprisingly comfy for a pickup truck – though we recommend you avoid the lower spec versions if you crave a few creature comforts.

Isuzu doesn’t make cars any more – pickup trucks are its specialty. And that shows in the D-Max, which nails all the fundamentals of a good workhorse. Basic versions are fairly affordable, but the top-spec V-Cross version comes loaded with kit.

The previous version of the Isuzu D-Max was already a popular, capable buy, and the latest iteration promises to keep that trend going. While the 164hp 1.9-litre diesel engine isn’t the punchiest or most refined you’ll find in a pickup truck, it does allow the D-Max to tow up to 3,500kg (though this does drop to 2,500kg on rear-wheel drive models). It’s also surprisingly economical.

The driving experience is pretty good for a working truck. Granted, you need some weight in the back to settle the ride down, but even fully unladen it smooths out at speed and is plenty happy on a motorway slog. Handling is best described as secure, with the traction control kicking in even at modest cornering speeds to stop thing getting unruly.

Given Isuzu’s commercial focus, the D-Max doesn’t have the plushest interior out there, although the latest version is a decent improvement over the old car in terms of fit and finish. The large infotainment screen on higher models could be easier to use, too.  One area that’s seen a big boost, though, is the Isuzu’s safety credentials, as the latest D-Max has been awarded a five-star safety rating by Euro NCAP thanks to a wide variety of active safety systems being installed.

SsangYong is another small player like Isuzu, but it does make ‘proper’ cars, too. The latest Musso is actually based on the Rexton large 4×4 – a decent value alternative to a Land Rover Discovery. In fact, it’s basically that car with the rear-end chopped off to give it a loadbay.

As such the Musso is better to drive than you might think. Its engine is surprisingly refined, performance is pretty strong and it’s good at towing, being able to lug 3,500kg even with a full load bay. However, the ride is quite bouncy and unsettled, particularly when there’s no weight in the back, while the load bay itself isn’t the largest around.

The interior, though, is as smart and roomy as the Rexton on which it’s based – plus it comes decently loaded with creature comforts. It can’t match the D-Max for safety kit, however,

Did the previously mentioned Ford Raptor catch your eye, but you’d prefer it to have a bit more power? You’ll be pleased to know Ford has catered to your needs with the Ranger Raptor, which turns this workhorse commercial vehicle into a wannabe Dakar Rally racer.

With trick suspension, chunky tyres and its 213hp turbo-diesel engine, the Ford Ranger Raptor is extremely capable and fun to drive off-road. However, load-lugging concessions have been made to allow that cross-country prowess – towing capacity is a respectable 2,500kg, and the heaviest payload it can carry is a paltry-by-pickup-standards 620kg.

Officially, you can’t buy a Ford F-150 in the UK – the only way to get one on our side of the pond is via third party importers. However, we’re including it here because it’s one of the kings of the pickup truck world. It’s also incredibly popular in its USA homeland – despite all of the pandemic disruption, Ford still managed to produce more than 464,000 F-150 trucks in 2020.

One of the reasons why it’s such a strong seller is because there is a huge array of engine options for the Ford F-150. Options available include a torquey turbo-diesel, a burly 5.0-litre V8 and, in a first for an F-150, a petrol-electric hybrid setup. Depending on what’s under the bonnet, the F-150 is also capable of hauling trailer loads up to an incredible 6,350kg.

It may look like a regular Ford F-150 with a funky nose job, but there’s more to the new Ford F-150 Lightning than its redesigned bodywork. For the first time ever on one of Ford’s F-Series of pickup trucks, it ditches combustion engines entirely in favour of a fully electric setup.

It’s a pretty punchy powertrain, too: in its most potent guise, the F-150 Lightning has a whopping 563hp on tap and has enough oomph to tow more than 4,500kg of trailer loads. Despite being a big and heavy commercial vehicle, Ford claims the F-150 Lightning can be driven up to 300 miles between charges – though that’s according to the USA’s EPA range test procedure, rather than the WLTP system used on our side of the Atlantic.

It may have styling and a name that wouldn’t out of place in a sci-fi movie, but Tesla is adamant its Cybertruck isn’t a flight of fantasy. In fact, Tesla claims the first Cybertrucks should start rolling off the production line before 2021 draws to a close.