How do turbos work, and how do they differ from superchargers? 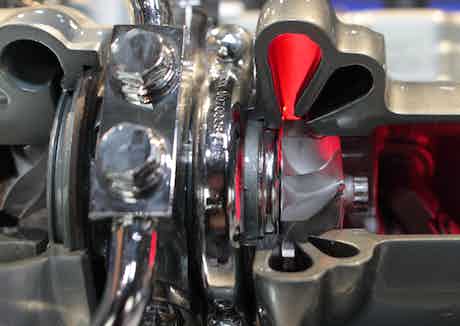 They were once the preserve of only the fastest performance machinery, but now turbochargers are fitted to the majority of cars on sale. But what exactly is a turbo and how does it work? You’ll find out in this advice guide.

If you were around in the 1980s, you’ll remember that no car could be truly cool unless it had a turbo bolted to its engine. Turbocharged cars, like Group B World Rally Cars, became icons, posters of them plastered on bedroom walls across the land. In fact, before long the tag was applied to everything from razors to trainers, accompanied by overblown advertising that usually featured a fighter jet. Because fighter jets are cool, as well.

So why all the fuss? It’s simple, really: power. Adding a turbo to a car’s engine is a highly effective way of massively increasing its power. In simple terms, a turbo forces more air into the engine’s cylinders which, added to some extra fuel, means a bigger bang can be created in the cylinder. A bigger bang means more power.

The latest turbocharged engines use incredibly precise metering of the fuel and air to boost efficiency as well as power.

How do turbos work?

We’ve already established that a turbo forces more air into the engine. Exactly how it does this is a little complex, but easy enough to get your head round.

An internal combustion engine works by drawing in fuel and air. That mixture is ignited to cause an explosion that generates power and the waste gases – exhaust – is forced out. In turbocharged engines, the exhaust gases are reused.

The turbo itself is a snail-shaped tube that funnels the exhaust gases towards a turbine and a compressor. The gases spin the turbine at incredibly high speed and the turbine spins the compressor. This sucks vastly more air into the engine than would be possible in a non-turbo – or naturally-aspirated – engine, which means a greater concentration of fuel can be used. That creates a bigger explosion in the cylinder and the bigger the explosion, the more power Is generated.

Early turbos were rather crude devices that delivered the extra power in a single, huge lump. Modern turbos contain mind-bogglingly complex systems that control how gases move through them to miniscule degrees of accuracy, giving more ‘linear’ power delivery and greater efficiency.

Turbos operate at incredibly high pressures and massive temperatures, so they’re usually accompanied by an intercooler and oil cooler. The intercooler cools the hot air coming out of the turbo and the oil cooler makes sure the turbo’s lubricant doesn’t overheat.

Why are so many engines now turbocharged?

Not only do turbos boost power, they increase efficiency. Because turbos use waste gases to generate power, the engine itself doesn’t have to work harder. That means it’s possible to use a smaller, turbocharged engine to produce the same amount of power as a larger, naturally-aspirated engine. Smaller engines are always more efficient than bigger engines, increasing fuel economy and reducing emissions.

Car manufacturers have been exploiting that fact with diesel engines for more than 30 years. Diesel engines are particularly suited to turbocharging because they have simpler intake systems to mix the fuel and air and tougher engine blocks that can contain the immense air pressure turbos generate. In the last 15 years or so, manufacturers have perfected metallurgy that allows a lightweight, alloy petrol engine block to contain ultra-high turbo pressures. Earlier petrol turbo engine blocks were usually made from heavy iron or steel. A lighter engine means the whole car weighs less and is more efficient.

The result of all that is a petrol engine like Ford’s 1.0-litre, 3-cylinder EcoBoost which can produce more power than Ford’s old 1.6-litre, 4-cylinder naturally-aspirated petrol engine while returning better fuel economy and lower emissions.

What other benefits do turbos have?

As well as increasing power, turbos increase torque – an engine’s strength – particularly at low revs. That’s useful in small petrol engines which tend to produce not much torque at high revs without a turbo. Naturally-aspirated diesel engines, by contrast, produce a lot of torque at low revs. Adding a turbo amplifies the effect which is why turbo diesels feel so strong if you floor the throttle at, say, 50mph in top gear.

Turbocharged cars also have quieter exhaust pipes. The turbo effectively reduces the amount of gas coming out of the exhaust, so it’s not as loud as a non-turbo car. You might hear a ‘chuff’ when you take your foot off the throttle, though. That’s the ‘wastegate’ which expels excess gas from the turbo when it’s not needed.

You’ll often come across the term ‘turbo lag’ which refers to the time delay between pressing the throttle and the turbo delivering its extra power. This is simply a function of the time it takes for the exhaust gases to reach the turbo and spin the turbine up to speed. A big turbine often exaggerates the effect.

Modern turbos have many ways of reducing lag. Some engines even have several turbos of increasing size that operate at different revs and electric motors that spin the turbine before gases even reach it are increasingly common. A certain amount of turbo lag is unavoidable, but many engines now have so little that it’s almost impossible to detect.

Turbos are another thing to go wrong, as well. They can and do – some engines are particularly prone to turbo issues. Thick, white exhaust smoke and a loss of power are the clues. Neglect, abuse and high mileage are the usual causes but if the car is properly maintained, it shouldn’t be a problem.

How is a supercharger different?

Superchargers also boost power by forcing more air into the engine, but the turbine is spun by the engine itself. They’re lag-free, produce more torque and sound amazing, but aren’t as efficient.

Configure your next turbocharged car