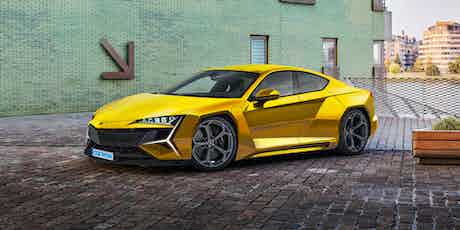 Lamborghini has confirmed that it’ll build a new all-electric performance car in the second half of the decade – this exclusive rendering shows what this new car could look like. Read on for full details…

Lamborghini has confirmed it will build a new electric car before 2030, following on from a new range of hybrid cars that’ll go on sale before the end of 2024.

Read on for full details of this new high-performance EV, including an exclusive rendering showing what it could look like.

Rather than build an all-out electric supercar, Lamborghini is expected to make its first electric car a four-door GT model – much like the Porsche Taycan and Audi RS e-tron GT. After all, the rip-roaring Lamborghini Urus shares more than just its colossal size with the Audi RSQ8 and Porsche Cayenne – all three cars have near-identical 4.0-litre twin-turbo V8 engines.

Lamborghini was on the brink of building a four-door GT car once before, in the form of the Estoque concept (above.) The new car won’t take too much inspiration from this concept, but its long, low silhouette and angular bodywork will still look unmistakably bullish.

Lamborghini has confirmed that its first electric car will go on sale before 2030. At this point, the Porsche Taycan (with which it’s expected to share some electrical components) will be almost 10 years old. This means Lamborghini’s first EV will come with some pretty significant mechanical upgrades in the form of larger, more powerful batteries and beefier electric motors.

Currently, Lamborghini’s quickest cars (the Aventador VJ and Huracan Performance) can accelerate from 0-60mph in less than three seconds. This new EV could edge closer to two seconds flat. Watch out, Tesla…

Lamborghinis tend to have wild-looking exteriors full of exposed carbon fibre, hexagonal trims and dark Alcantara punctuated by luminously bright stitching. Expect more of the same from its new electric car along with some next-generation infotainment technology such as advanced voice commands, giant screens and tonnes of connectivity features.

In terms of practicality, don’t go expecting to carry any designer furniture in the boot but the new Lamborghini will likely have four doors and either three back seats or two racy bucket seats.

Lamborghini isn’t going to be building its first electric car any time soon. So far it’s confirmed that it’ll reveal a new range of hybrid cars that’ll go on sale before the end of 2024 and its first EV will appear in the ‘second half of the decade’.

When it does appear in showrooms (sometime between 2025 and 2030) you can bet it’ll cost significantly more than its Porsche and Audi equivalents. A Lamborghini Urus SUV costs almost £40,000 more than a top-spec Audi RSQ8. Apply that logic to the new electric GT car, and you’ll be looking at a bill for more than £170,000.

Can’t wait for Lamborghini’s first electric car? Check out the latest Audi e-tron GT deals or watch an in-depth Porsche Taycan review. Not sure which car is best for you? Compare the top 10 electric cars on sale.