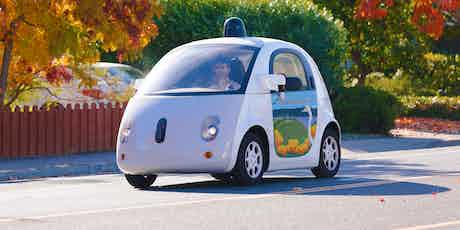 The Google Self-Driving Car has undergone six years of testing on U.S. roads but when will it finally go on sale? Read on to find out…

Google will aim to compete with the likes of Tesla and Apple when it launches its first electric vehicle, the imaginatively-titled Google Self-Driving Car. The technology giant’s first foray into the automotive industry will reportedly be a high-tech driverless offering capable of travelling fully autonomously on roads shared with conventional cars.

Rather than try to hide its efforts from prying eyes, Google has allowed a number of outsiders to watch, inspect and even take passenger rides in its new car. Read on for full details and pictures of this radical project…

With its rotund proportions and friendly, face-like front end, the Google Car looks unlike anything else on the road. Its styling is, in many ways, more reminiscent of a kitchen appliance or a large child’s toy than a car – its bulbous shape does, however, give the roof-mounted guidance system an unobstructed view of the road ahead.

The prototype’s short overhangs and black painted protruding sensors may be modified for mass production and to meet stringent crash test requirements, however. It’s not yet clear whether versions later on will offer more passenger space.

The Google Car is designed to be an autonomous self-driving vehicle and, as a result, has no steering wheel or pedals. Instead it’s been fitted with two seats and a simplified dashboard with a single screen that displays the planned route. The large windows and tall, curved roof help maximise the cabin space and make it feel as airy and as spacious as possible. Crucially, two cupholders are fitted as standard.

The Google car does come with one crucial button mounted on the central armrest that allows its passengers to instantly shut off all on board systems in the event of an emergency. This feature has been installed to comply with autonomous vehicle regulations in Nevada and Florida.

The Google Car is powered by an electric motor and a compact battery pack. No official details regarding range or charging times have been released but these early prototypes can reportedly reach a top speed of 25mph – enough to comfortably cruise through congested cities or quiet residential areas.

Although the Google Car has been testing its autonomous features for more than six years – during which it’s covered more than 1.5 million miles – the car’s official launch may still be a few years away.

Google has also been spotted testing a fleet Lexus RX SUVs fitted with an array of cameras and laser measuring systems to create detailed maps of many US cities. This would suggest that, at the very least, it’s expanding its vehicle development program across the United States.

This early prototype could be the first in a line of vehicles designed to offer a more flexible alternative to current public transport systems. As a result, the Google Car may never actually be available for purchase – rather you could hire one for short journeys as you would a modern taxi.

A second possibility is that the prototype in these images is a testbed for autonomous driving software that Google plans to license to other car manufacturers in the future. Tesla has shown it’s capable of developing its own autonomous driving software but the prohibitive cost and potentially dangerous early testing phase could make buying a tried and tested Google system more attractive to many car makers.