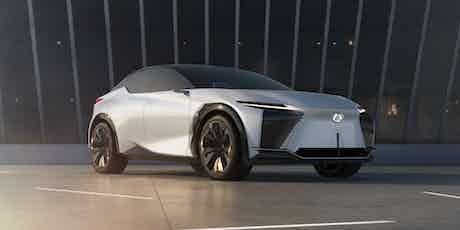 Lexus has revealed a new concept car that will pave the way for some of its new electric models. Read on for full details.

This is the Lexus LF-Z Electrified Concept — a new car that gives you a preview of how Lexus’ upcoming electric cars might well look. No direct production version is likely, but expect to see some of the tech here trickle down.

This concept is mostly here to show you how upcoming electric cars from Lexus will look — with 10 hybrid, plug-in in hybrid or all-electric vehicles set to come from them by 2025.

The front of the Lexus LF-Z Electrified takes the huge ‘spindle’ grille design that Lexus uses across its current range and reinvents it as a body-coloured element of the front bumper that blends in a funky cross pattern. Those inserts on either side look to be made of a translucent material, possibly hiding the sensors and stuff to make its autonomous driving tech work.

Being an SUV, it’s pretty boxy in stature too — helped by its particularly angular panels above the wheel arches. There’s a glass roof as well, with a flap that looks to be nicked off the back of an F1 car plopped on top.

At the back, a single strip of LED lights makes up the brake light with ‘electrified’ across the back just to make sure you know this isn’t using some thirsty combustion engine. There’s a rather large mesh panel as well, divided by another LED light that would probably work as a fog light.

This is apparently a car focused around the driver, which is an impression you may get from looking at the interior.

There’s not much fuss really, with a small racecar-like steering wheel surrounded by three screens — one for driving info, the right side for navigation and the left presumably for info on the car’s batteries. If that wasn’t enough, there’s an augmented reality head-up display too.

The seats are like a futuristic take on a bucket seat, and you might even notice the pedals have a fast forward and stop logo on them. In the back, there’s two very deep seats.

The Lexus LF-Z is said to use a 90kWh battery pack that supports 150kW fast charging and will let the car cover 373 miles between charges.

Its motors produce 544hp and will let the LF-Z Electrified Concept cover the 0-60mph sprint in three seconds flat. That power is sent through a new ‘4Direct’ all-wheel-drive system.

There are two particularly clever bits of tech on the Lexus LF-Z Electrified Concept. The first is that the steering wheel is electronically connected to the front wheels rather than using any mechanical bits, which is said to cut down on vibration and improve response.

There’s also an artificial intelligence system that acts ‘as a lifestyle concierge’. Speaking like a real human, that means it can give you route suggestions, learn bits about your driving habits and even book a restaurant for you.

So the Lexus LF-Z Electrified Concept won’t enter production directly, but it will inspire the next wave of Lexus electric cars.

The Japanese car manufacturer has said it wants to introduce 10 new hybrid, plug-in hybrid or electric models by 2025. You can expect some will look like this concept does, and maybe even use bits of the technology. Keep your eyes peeled over the next few years, then.