News All-electric Bugatti rendered – could this be the world’s quickest EV?

All-electric Bugatti rendered – could this be the world’s quickest EV? 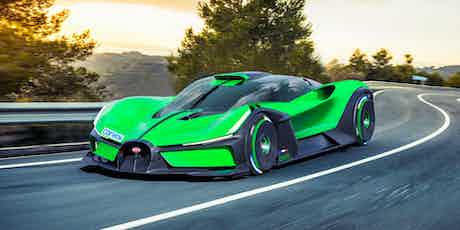 Could Bugatti be working on an all-electric car with Rimac? Read on for more on what could be the world’s quickest electric car.

Could Bugatti be working on the world’s fastest electric car? It’s very possible, and this exclusive new render gives you a glimpse of how it may look.

It’s possible the French manufacturer, known for its world record-breaking Veyron and Chiron, could team up with Rimac to make the quickest-accelerating electric car yet.

This exclusive render imagines the first all-electric Bugatti to be a sleeker version of the Bolide — a track-only hypercar that uses the trademark W16 engine.

It keeps the flat front end, albeit with less aggressive aerodynamics to help the EV cut drag in a bid to improve its top speed and acceleration.

Gone too is the huge rear wing for the same reason, though the ‘90s Group C racer-like wheel covers could be retained.

There’s a chance Bugatti could team-up with Croatian hypercar-builder Rimac to develop its new electric car. This might sound like a left-field move, but there’s a reason. Bugatti is a member of the Volkswagen Group, which also includes Porsche. Porsche owns a 24% stake in Rimac, and there was even talk in 2020 of the Volkswagen Group selling Bugatti to Rimac.

If Bugatti is to team up with Rimac for its first electric car, it could use a version of the motors used in the recently-revealed Rimac Nevera.

This electric hypercar deploys four motors, one on each wheel, to produce 1,914hp and 2,300Nm of torque. It’s possible the Bugatti version would take this further too with some more development work, and the financial might of the VW Group behind it.

As a result, it could topple the Rimac Nevera’s 0-60mph time of 1.85 seconds — potentially even closer to the 1-second mark — as well as boast a top speed well in excess of 260mph.

The Rimac Nevera uses a 120kWh battery that’s good for 340 miles of range, so expect the Bugatti to be somewhere close to this too.

There’s support for 500kW rapid charging on the Nevera as well, which will likely carry over. This lets the Croatian car charge from 20% to 80% in just 19 minutes.

Don’t expect to see the all-electric Bugatti until at least 2025, and when it does come, it will likely cost more than you’ve got hiding under the sofa.

Think somewhere in the £3m ballpark and you’re likely along the right tracks.