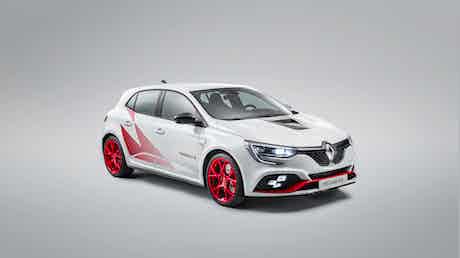 The Renault Megane R.S. Trophy-R is the spiritual successor to souped-up, lightweight models like the Megane R26.R. Here’s everything you need to know about this (incredibly) hot hatch.

The Trophy-R is the new apex of the sporty Renault Megane R.S. range, providing a level above the previously top-spec Trophy version. Currently, the regular Trophy costs around £32,000; with the Trophy-R adding a load of costly and exclusive features, the price for this car climbs to £51,140. Getting the car with the optional carbon wheel pack will set you back £63,140, while one fitted with the Nurburgring Record Pack (which has bigger, carbon-ceramic brakes) is £72,140.

The first UK deliveries will start in October. But only 30 are coming to Britain, of just 500 being built in total.

As the range-topping version of the Renault Megane R.S., the Trophy-R keeps much of the standard car’s look. So this means you get comma-shaped headlights, a unique grille shape, extra air intakes, a rear spoiler and a large, central exhaust pipe. On top of this, the Trophy-R adds a ‘mother-of-pearl’ paint finish, bright red highlights on the front end and rear doors, and bright red 19-inch alloy wheels. These can be upgraded to trick, lightweight carbon fibre wheels – the kind you used to only be able to get on the rare Koenigsegg Agera R hypercar.

You will also find a new air vent on the top of the bonnet that improves the airflow to the engine. Another option Trophy-R is to replace its six ‘R.S. Vision’ lamps, placed on the air intakes, with yet more vents, providing even further engine cooling.

Compared with the standard Trophy, the Renault Megane R.S. Trophy-R is 130kg lighter. On the exterior, everything from the wheels to the bonnet to the exhaust pipe has been made from lighter materials than you would find on the regular Trophy.

Some aerodynamic remodelling has also taken place. The ‘blade’ at the front of the Trophy-R – coloured red and found just above the number plate – has been reshaped, while black vertical slats have been put at the bottom of the back end. Plus, the rear wiper has been removed entirely.

The Trophy-R’s suspension has been heavily revised over the regular Trophy’s. The front axle has an increased negative camber, meaning that the tyres remain just as in contact with the ground in fast turns as they would while driving in a straight line. This makes for faster cornering with improved grip. Also helping with cornering is the Torsen limited-slip differential, which has been carried over from the Trophy.

Elsewhere, the Trophy-R has new dampers, lowering the car’s ride by up to 16mm. The brake pistons have been extended to 42mm – over the Trophy’s 40mm ones – to increase their efficiency. They can also be upgraded to lighter and even longer (44mm) carbon-ceramic discs.

Another optional extra is the DESS lead battery, which sheds 4.5kg of weight.

The Trophy-R has a turbocharged, four-cylinder, 1.8-litre petrol engine that generates 300hp and 400Nm of pulling power. It can go from 0-62mph in 5.4 seconds (0.3 seconds faster than the Trophy), before topping out at 163mph.

The car comes with a six-speed manual gearbox, lighter then the standard Trophy’s dual-clutch automatic setup. Like the rest of the Renault Megane R.S. range, the Trophy-R is front-wheel-drive.

Carried over from the regular Trophy and onto the Trophy-R is the car’s Multi-Sense function. This lets you adjust the steering, acceleration sensitivity and ambient lighting depending on not only the location, but also the atmosphere, that you want to drive in.

Like the exterior, the interior has undergone several weight-saving changes, too. The two monocoque racing seats not only hug your body as you drive but also save up to 7kg each.

Even more dramatic is what Renault has done with the Trophy’s rear seats: removed them entirely. The whole bench has been taken out; if you opt to get the car with carbon fibre wheels, the empty space gets straps and nets so you can store your wheels away safely. Furthermore, the windows in the rear doors have been given thinner glazing and are fixed in place, so they can’t open.

Despite all the weight shedding, the Renault Megane R.S. Trophy-R does have an infotainment system. However, when compared to the Trophy, the screen has shrunk considerably, being reduced from 8.7 to seven inches. The system does have a reversing camera, though, helping you navigate such tricky manoeuvres as parallel parking.

Bookmark this page to stay up to date on the 2019 Renault Megane R.S. Trophy R.