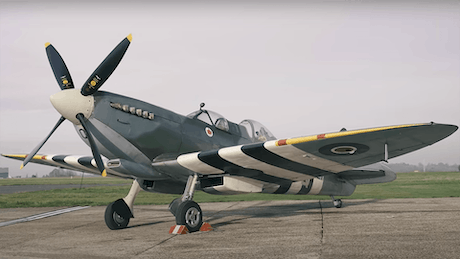 Yes, really. carwow reviews a Spitfire. Read on to find what Mat makes of this legendary fighter plane.

This Spitfire is a ‘Mark 9’ example of the legendary fighter plane — meaning it’s the ninth version in a total of 24 ‘Marks’ designed and built by the Supermarine aircraft builder.

All look pretty similar though, and each has a striking beauty to it. This one is no exception.

Of course, it was designed to be functional rather than look good — but the Spitfire does both. Get up close and you will spot plenty of panel gaps and rivets, though there’s an elegance about its smooth curves.

You’ll spot a few intakes at the front, though. These aren’t for show — all are designed to keep the gargantuan V12 engine well-cooled.

Getting into a Spitfire is perhaps not the most graceful thing. You need to lift the cockpit glass up, drop a flap down and climb aboard the wing.

Once you’re in though, there’s a surprising amount of space. Not quite so much if you’re looking for luxury — but at least as far as consumable warplanes go.

There’s a lot going on with the dashboard, but it’s all functional. You might need to crank the seat up a fair bit if you’re short, though.

It’ll take you about 380 metres to get a Spitfire airborne and, once you’re up, you may be surprised to find it quite relaxing to fly along in. Perhaps there’s a bit more Rolls-Royce about it aside from the engine…

When you do spot a Messerschmitt on the horizon though, you’ll be glad to know the Spitfire is super-agile. With a top speed of over 400mph too, you won’t be left wanting for performance.

If you’re the British Air Ministry in the mid-1930s, you should go right ahead and buy a Spitfire. You might find it comes in rather handy down the line…