How to test drive a car before you buy it 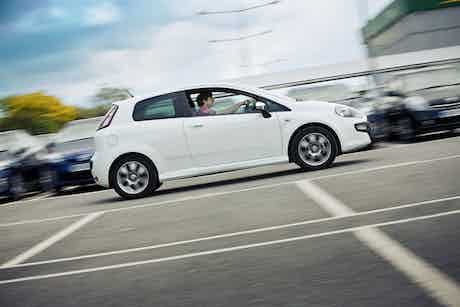 It’s stressful enough buying a car, even before you get to the point of climbing into it for the first time – and carwow can only help you so much before you have to make the decision yourself.

But testing a car out is a vital step in the car-buying process. You’ll need to evaluate it to see not only if what you’ve seen on paper or in our car reviews section fits in with your lifestyle but if it has any foibles that you don’t like – regardless of what the motoring press says.

This stage of the decision is something that can leave many people confused – but stick with our tips below and you’ll be a car-buying expert in no time at all. It’s pretty easy to be so excited or nervous about driving an unfamiliar car that you forget to check vital points – that’s where this guide comes in.

1. Play with everything. Everything.

If you buy it, you’re going to be driving this car for a long time, so you’ll need to familiarise yourself with all the controls you’ll use each day. It’s no use finding out a week after purchase that the cruise control is fiddly to operate or there’s a vital button obstructed by the gearstick.

Tinker with all the seat and steering wheel settings too. You’ll need to find a good long-term driving position and, if you’re not the only person who’s going to drive it, be sure it’s easy to find the position quickly and easily a second time.

2. Drag the kids along too

You’re not only going to be stuffing yourself into the car day to day – your family needs to be in it too. The kids need to be comfortable back there, both the ganglier teenage ones and any child-seat occupants. If nothing else it’s worth finding out if the front seats are within a toddler’s kicking range and making sure the interior is as Ribena-proof as is reasonable.

There’s little using buying a car that doesn’t have the boot space to fit in with your lifestyle, whether that means golf clubs, push chairs, dogs or bikes. Outright load space figures don’t always tell the whole story – and how different manufacturers measure it may not be consistent – so take along something you’re likely to carry regularly to see how the boot measures up. It won’t be the first time a car dealer has seen someone turn up to test out a car with a drum kit, believe us.

4. Drive it about the car park first – and last

Let’s face it, every journey begins and ends with parking, so you’ll need to get a handle on how the car feels at low speeds, particularly when it comes to visibility. It’s no good buying a car you can’t pootle around parking bays in without bouncing off the scenery – unless you’re buying a Citroen C4 Cactus, where you get bubble-wrap panels to help you out.

Many modern cars have large A-pillars (the posts that connect the roof to the body of the car in front of the driver and passenger seats) for crash safety that obstruct your view and small rear quarterlight windows that make for poor backwards visibility. It may affect your decision not only to buy the car or not, but whether to pick certain things off the options list like parking sensors, reversing cameras and self-park aids – or even tinted privacy glass.

Most salespeople have their own routes around the showroom planned and they’re often a good mix of roads, but you may want to plan a route that more closely represents what you’ll be using the car for. It’s well worth getting a route that involves a good mix of road types. You’ll need to discover if the car you’re driving makes an annoying noise at 70mph, but also keep in mind the sort of driving you’d usually be doing.

Don’t just stick to the smoothest tarmac you can find either. Drive it over some of Britain’s more post-apocalyptic roads so you can find out just how comfortable it is when the going gets rough.

6. And don’t mollycoddle it

Give it some stick. It doesn’t matter what you’re looking to buy, you’ll at least need to know how it feels under extremely hard braking so that when an emergency arises you’re not caught out. We’re not saying do a full ABS stop in the middle of a town centre with a queue of traffic behind you, but it’s worth getting a handle on how the car feels in a panic situation.

Hard acceleration and vigorous cornering are perhaps less vital, but we all like a bit of fun every now and then. Now’s the time to find out if it sounds like a bout of flatulence under hard acceleration or flails about in the bends – before you hurl thousands of pounds at it. If you’re buying a sports or performance car, some manufacturers will offer experience days in the confines of a race track, so get on one of those.

It’s all well and good poking and prodding and driving in an hour-long spell with a salesman hovering nearby, but to really get used to how a car feels you ideally need to borrow one for a short spell.

Many dealers will be reasonably happy to lend you a vehicle for a weekend or occasionally a week at a time and it’ll give you a chance to experience ownership before taking the plunge.

Even if you liked the car, don’t settle for just one test drive. Try out another one – the first car might have been unusually good or bad. This is particularly important on used cars, as “Oh, they all do that” is one of the commonest phrases you’ll hear buying secondhand.

You might also notice that different versions of the same car (such an an entry-level version or a top-of-the-range trim) soak up bumps differently – you might find an entry-level car more comfortable on smaller wheels, for example. This’d save you money and trips to the osteopath.

9. Have a crack with different engines too

Whether you’re after a particular engine or not, it’s worth trying out some alternatives. You might have your heart set on a petrol model but find that a diesel version is just as good, or a slightly larger engine might turn out to be worth the extra money.

10. Try out the rivals at the same time

Plan a day of test drives. If you’re heading to the Ford dealership to try the Focus out, set appointments at Volkswagen for the Golf, Peugeot for the 308, Mazda for the 3, Nissan for the Pulsar and so on. Testing these things out back-to-back is a great way to keep your impressions of them fresh in your mind and allow for a more objective comparison. If you’ve dragged the kids along as per point two, most industrial sites with car dealerships growing on them have also sprouted a fast food burger restaurant too. Don’t expect it to be the healthiest of days…

If you have no idea what you’re doing, take along a friend who does rather than pretending you do know what you’re doing. It’s just about impossible to gain any useful information from physically booting a tyre – but by doing so you tell the salesman that you’re inexperienced and probably an easy sell.

Once you’re settled on your car, find out if the dealer is on carwow. You can build your ideal car specification using the carwow configurator and then receive best offers from the friendliest official dealers around the UK – meaning you don’t have to do the haggling to get a good deal.