Compare the running costs of your car with an electric car 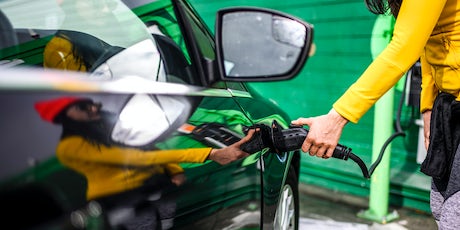 The future is electric

Electric car sales are growing fast, by 2030 50% of new-car sales in the UK are expected to be electric. Only a few years ago if you wanted an EV you were limited to a quirky-looking car like the Nissan Leaf and that was about it. Today, the Leaf has now grown into a stylish practical car, and joining it is everything from the cute Renault Zoe to the ludicrously quick Tesla Model 3 – and the list is only going to get bigger.

But how much will an electric car cost you to run? And how do these costs compare with a petrol or diesel-powered car. Are electric cars’ higher prices justified by their cheaper running costs?

Our electric car running costs tool shows you how much an electric vehicle will cost to buy and run compared with the petrol or diesel car you own or are considering buying. Read our article to find out more.

The cost to charge an electric car should be considerably less than to fill up a car with an internal combustion engine, simply because electricity is cheaper than petrol or diesel.

There are variables though, such as which electricity supplier you use. If you charge up using a home charger and you’re on a cheap electricity tariff then, typically, the cost per mile of running an electric car could be around a quarter of that of a traditional car. Use public charging points, where the cost of electricity is comparatively higher, and you will pay more.

Your driving style will affect how often you have to charge up too. If you are one of those drivers that treat the speed limit as a target to be broken and drive everywhere as fast as you can, you will drain your batteries’ capacity quicker than if you take things a little easier.

If you want to know how to calculate charging costs read our ‘How much does it cost to charge an electric car?’ blog post

If you want to know more about charging times read: How long does it take to charge an electric car

And to find out more about electric charging stations near you and charging infrastructure, have a look at: Find your nearest electric car charging point

If you want help to figure out whether a petrol, diesel, hybrid or electric car is for you, then take a look at our Fuel Chooser

Vehicle tax, more commonly known as road road tax, is another area where electric car buyers can make savings. Electric cars with a list price of less than £40,000 are exempt from paying the vehicle tax other cars are subject to. That means you’ll pay nothing.

Compare that with the £2,135 first-year tax you’ll pay for a car with high CO2 – followed by another £145 ever year after that – and an electric car starts looking like an extremely attractive proposition.

Buy an electric car with a list price of more than £40,000 (before discounts) and you will have to pay £320 a year. You you only have to pay this rate for five years (from the second time the vehicle is taxed).

Despite their high-tech image, electric cars actually have fewer moving parts than a car with a conventional engine, meaning there are less things to go wrong and need replacing. The government agency tasked with promoting electric cars, Go Ultra Low, estimated that an EV’s maintenance costs will be around 70% cheaper than those of diesel or petrol car over its lifetime.

Data experts CAP HCI estimated that servicing electric cars is also 23% cheaper on average than servicing a diesel or petrol car over a three-year/60-000 mile period.

Small electric cars, such as the Renault Zoe, will be even cheaper – costing 35% less to service than a similar-sized petrol car. For bigger electric cars, the gap wasn’t so great, with the electric Volkswagen e-Golf costing about 20% less than a regular Golf.

You don’t need a specialist insurer for your electric car as most mainstream insurers will cover EVs, but your premiums may be a bit higher.

In the main, insurers use similar parameters when calculating electric car premiums – how long you have been driving, how powerful the car is, where you live etc etc. However, a recent study by Vantage Leasing found that electric car insurance premiums were 14% higher than their petrol or diesel equivalent.

Electric cars’ higher purchase cost was highlighted as the main reason for this, but also the specialist parts and specially trained mechanics needed to fix electric cars also contributed to higher premiums.

Our advice would be to approach insuring an electric car in the same way as you would to insure petrol or diesel models – get a range of quotes from a host of different insurers and comparison sites and choose the cover that suits you best.

Would your insurance cover you in the event of someone tripping over your charging cable? Check your insurers policy document, but most policies should protect you if you’ve taken reasonable steps to prevent this kind of accident.

Currently, electric cars are exempt from paying London’s Congestion Charge because they don’t release harmful emissions into the environment. That means if you regularly drive into and through central London you will save up to £14 every day you drive through the Congestion Charge zone. You have to apply for the discount and it costs £10 to register your car.

Helping you buy an electric car

While electric cars have cheaper running costs than petrol or diesels, they do tend to cost more to buy. You can mitigate this, though.

First up, you can get a discount on the purchase price of a new electric car through the UK government’s plug-in grant.

This grant will pay for up to 35% of your electric car’s purchase price, capped at a maximum of £3,500. The best part is, you don’t need to do anything – the grant is automatically factored into the car’s price at the dealer.

Another grant covers up to 75% of the cost of installing an electric car charger at your home. A domestic charging station like this will charge your electric car quicker than using a traditional three-pronged plug and you’ll pay less for your electricity than at a public charging station. And you have the convenience of keeping the car parked up at your house. Find out how to get the Electric Vehicle Homecharge grant at the UK government website.

In addition, people in Scotland can apply for an interest-free loan of up to £35,000 to cover the cost of purchasing a new pure-electric car or plug-in hybrids. The loan is repaid over a period of up to six years. Find out more at Greener Scotland