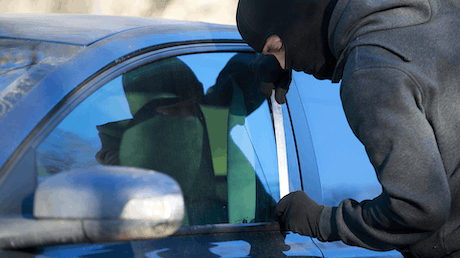 Although car theft is not always preventable, there are steps you can take to help protect your car and deter thieves.

Though you may have to stump up some cash for some of these, there are a few simple actions you can take that won’t cost a penny either. Here are 10 tips to improve your car’s security.

If possible, park as close to street lights as you can with as much visibility on your car as you can get. This may put thieves off as they’re more likely to be spotted, particularly if you’re in a built-up area.

It sounds obvious but it’s surprisingly easy to forget to lock your car. By simply using your car’s locking system, you’re already adding a layer of protection.

After all, it’s much easier for someone to take your car if all they have to do is open a door. You can never be too safe double-checking.

Having valuable stuff on show in your car may attract unwanted attention. A USB cable or two should be ok, but expensive stuff is better taken out of your car.

If you do feel you need to store valuables in your car, use hidden storage compartments like the glovebox and under the armrest if your car has the capacity.

4. Use a steering wheel lock

Though the steering wheel lock is something of an old-school method of improving car security, it’s still pretty effective.

Aside from physically locking your steering wheel, it’ll also serve as a visual deterrent. Most modern cars will have in-built wheel locking systems, but there’s no harm in adding an extra one.

5. Have an immobiliser installed

Similarly to wheel locks, immobilisers are often built into modern cars. Still, there’s no harm in having an aftermarket system installed.

These work by having a transponder installed in the key (or as a separate fob) and a receiver within the car itself. If the receiver is unable to detect the key, the car will not be able to start.

Fitting an immobiliser may also reduce your car insurance premium, too. It’s worth checking with your insurer to be sure.

6. Install CCTV at your property

If you park your car within sight of your house, installing CCTV is an effective way to improve your car’s security.

Though it doesn’t physically prevent theft, it could serve as a visual deterrent. If the worst does happen and your car is stolen, recorded footage could help the police recover it and identify criminals.

A motion sensor light works well in addition to CCTV. Again, it can serve as a visual deterrent — lighting up any potential thieves near your car and potentially alerting yourself.

If the worst does happen and you have CCTV installed too, it’ll help provide a clearer image.

8. Store your key in a Faraday pouch

Keyless entry and starting systems are commonplace on cars now. Though these are convenient, it also puts your car at risk of ‘relay’ theft.

This is where thieves will send a boosted signal from your car to the key in your property. The car will then unlock and be able to be started as normal.

Though manufacturers are constantly improving the security of these systems, a Faraday pouch is an effective and affordable solution. These pouches will block the signal from your car reaching the key, thus rendering any ‘relay’ theft attempts impossible.

Though a tracker itself may not directly deter theft, it can be a seriously useful tool for recovering your car.

Trackers come in all sorts of forms, but all have the end goal of letting you keep a remote eye on your car.

You should never seek to recover a stolen car yourself, though. Instead, pass on tracking information to the police to allow them to locate your car.

10. Fit a foldable bollard to your driveway

Technology is all good and well, but sometimes the simplest of solutions are the most effective.

If you have a narrow driveway, a foldable bollard could be your best method of theft prevention. These can allow you to physically block your car in when you’re not using it.

Plus, as they’re typically made of metal, removing them discretely and quickly will be virtually impossible for any thieves.

What should I do if my car is stolen?

If your car is stolen, do not attempt to recover it yourself. You could be putting yourself at serious risk.

Dial 101 and ask to speak to your local police. Provide them with your registration number, the make and model as well as the colour.

You’ll be given a crime reference number, which you’ll need to inform your insurance company. The police will inform the DVLA of the theft and if the vehicle is later found.

If you spot your own car after it has been stolen, again, do not attempt recovery. Call 101 and inform the police.