Part-worn tyres explained: what are they, and are they safe? 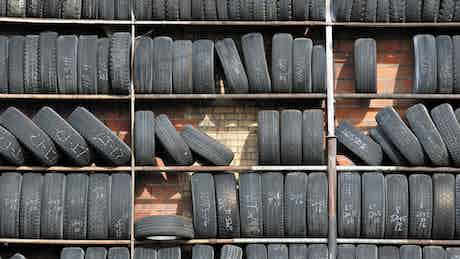 You may be tempted to save money by seeking out part-worn tyres, but should you?

The cost-of-living crisis means almost everyone is feeling the pinch at the moment, and one of the ways drivers may be tempted to save money is by buying part-worn tyres.

Part-worn tyres are essentially second-hand tyres that still have some life left in them after having been removed from cars getting new replacement tyres fitted. Here, we’ll look more closely at what part-worn tyres are, their pros and cons, and help you decide whether or not you should buy them.

What are part-worn tyres and where do they come from?

The majority of part-worn tyres come from Germany, where the legal tread depth is 3mm, compared to the 1.6mm legal minimum in the UK. This means German drivers tend to change their tyres earlier than Brits, and tyres that still have some life left in them can be exported here to be resold.

Part-worn tyres must legally have 2mm of tread left across the entire breadth of the tread and circumference of the tyre. They must also be clearly advertised as part-worn, with those words having to be permanently marked on them as well.

Other rules stipulate that part-worn tyres must pass an inflation test, and be free from cuts, lumps and bulges. They must also not have any part of the tyre cord or ply (inner layers of the tyre) exposed.

It is very difficult to recommend anyone buy part-worn tyres. The contact patch of a tyre (the section of rubber that touches the road) is only as large as an adult hand, and tyres are the only thing keeping you and 1,500kg-plus of metal, glass and plastic safely connected to the road.

That small contact patch is subject to very strong forces when your car brakes, accelerates and corners, while tyres with little tread are far worse at dispersing water than tyres with a decent amount of tread. And while the UK’s legal minimum tread depth is 1.6mm, drivers are generally recommended to get new tyres when the tread gets to 3mm deep.

Plus, all of the above assumes all part-worn tyres meet the minimum regulations – which many do not. A study by Tyresafe analysed 50 part-worn tyres, with over a third found to have dangerous faults.

These faults included poor repairs, exposed cords, damage to the tyre beads (the inner rims that hold the tyre to the wheel), and evidence the tyres had been driven while not inflated correctly – something that can damage the sides of tyres. One part-worn tyre even had a piece of metal sticking through its tread.

A further investigation by the Local Government Association (LGA), which represents councils in England and Wales, found similar results, with almost half of all part-worn tyres sold in some areas not meeting legal minimum standards.

Government figures, meanwhile, show 17 people were killed and 719 injured in 2017 in accidents where illegal, underinflated or defective tyres contributed to the collision.

So while you may be able to spot a tyre with a lump of metal sticking through it, unless you have a trained eye you are unlikely to be able to identify damaged beads and signs of underinflation.

In short, of all the things to cut back on, tyres should be last on your list.

Where are part-worn tyres sold?

Part-worn tyres are sold, perfectly legally, by countless independent vendors across the country.

Brand-new tyres, simple as that. They may be more expensive, but considering they’re one of the most important parts of your car, it’s worth spending reasonable money on new tyres. We’d go so far as to advise you to buy at least mid-range new tyres rather than going for budget options.

How long can part-worn tyres last?

Are part-worn tyres worth buying?

No. The desire to save money in these tough times is more than understandable, but tyres are not something that should be scrimped on. Part-worn tyres with hidden damage can cause fatal accidents.

Are part-worn tyres going to be banned?

Nissan Qashqai vs X-Trail: which used car is right for you?
Ford Fiesta (2008-2017) used buying guide
Can you lease a used or second-hand car?
Is there VAT on used and second-hand cars?
Where to buy used cars
How to claim for pothole damage
Head-up displays (HUDs) in cars: what are they?
10 best handling cars
What is a good mileage on a used car?
Find the cheapest petrol prices – UK price comparison. Plus: prices set to fall
Car subscription: what is it and how does it work?
Business car lease vs personal car lease
Company car tax on electric cars explained
10 best cars for long-distance driving
Mini Excitement Pack: what is it and is it worth it?