What to do if you break down on the motorway 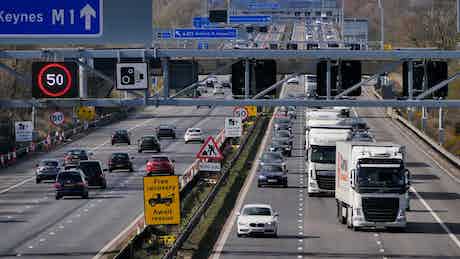 Breaking down on a motorway is one of the more unnerving things that can happen on the road; prepare yourself with this guide

For those of us past a certain age, it may seem anecdotally that the sight of cars broken down on the motorway is far less common than it once was.

This may well be because vehicle reliability has improved markedly over the years, but that obviously doesn’t mean breakdowns don’t happen, and of all the roads to break down on, a motorway can be the trickiest – not least because since the advent of smart motorways, you may or may not have a hard shoulder to head to.

This guide assumes your car will still be carrying momentum and moving when it stops working, although we’ll cover more extreme scenarios towards the end.

What to do if you break down on a conventional motorway

The first thing to remember to do if your car experiences difficulties on a motorway is to stay as calm as you can. Keep your wits about you, and don’t make violent or sudden inputs with the steering wheel or pedals.

Cars don’t typically stop completely in their tracks all of a sudden – they either give warning signs (either literally, or with a loss of power) before they stop working. And even if the engine dies completely, you should have a decent amount of momentum, allowing you to get to a safer location.

The next thing to bear in mind is that you should move to the left of the motorway. If you are close to a junction, try to make it to this, indicating left as you move across lanes.

If you are too far away from a junction and on a conventional motorway, the hard shoulder is the place you want to get to. Indicate left, and move across any lanes you need to in order to get to it.

Once on the hard shoulder, get your car far over to the left, but leaving enough room for the doors to open so people can get out on the left-hand side. Leave your wheels pointed towards the left, put your hazard lights on (and your sidelights if it’s dark, and fog lights if visibility is poor.)

Grab any high-vis vests you may have, as well as mobile phones and medication. Get out of the left-hand side of the car and stand behind the safety barrier where there is one, moving up the bank or across the verge to get as far away from the motorway as possible, looking out for uneven surfaces and debris.

You’ll also want to stand behind the car rather than ahead of it, as hard shoulders can be dangerous places, and there remains a chance your car could be hit by an inattentive driver; you don’t want to be standing ahead of it if this happens. Leave any animals in the car, as they may become scared and run out into traffic if you take them out.

It is best to use one of the emergency phones that are placed by the sides of motorways, as these help authorities pinpoint where you are. Alternatively, call National Highways (the company that runs motorways) using your mobile phone on 0300 123 5000, then  call your breakdown firm.

What to do if you break down on a smart motorway

As stated above, cars tend to give reasonable notice when they are experiencing difficulty. If you are on a smart motorway and you have car trouble, two key messages are the same as for a conventional motorway: stay calm, and move to the left.

Leave the motorway at the next junction if you can, or try to make it to the nearest refuge area. Smart motorways may not have hard shoulders (or at least not permanent hard shoulders), but they do have refuge areas – orange-painted laybys – at regular intervals, and you should head to one of these if at all possible. Then, as with a conventional motorway, get behind the barrier and contact a breakdown firm.

It is possible – unlikely but possible – that you won’t be able to make it to a junction, hard shoulder or refuge area, instead breaking down in a live lane of a motorway, or in roadworks. This can happen on a smart or conventional motorway, and on either type of motorway you should behave in the same way: stay in your vehicle with seatbelts on, put your hazard warning lights on, and dial 999 to alert the emergency services. On smart motorways the authorities should close the lane you are broken down in far in advance of your car.

Much of the above assumes you are able to leave the car safely and easily, but this may not be possible for people with disabilities. If you are not able to leave your car once you have pulled over to a place of safety, stay in your vehicle with your seatbelt and hazard lights on, and contact the emergency services via 999, telling the operator that you have a disability.

How to rejoin a motorway safely

It may be that a breakdown service is able to fix your car by the roadside, meaning you will need to rejoin the motorway.

If you are on a hard shoulder, build up speed on this, indicating right and looking for a gap in traffic. Also bear in mind there may be another vehicle or vehicles stopped on the hard shoulder ahead of you, so look out for these.

If you’re thinking of upgrading your motor, head over to carwow, where you can compare a great range of deals on different models.

Check out our latest offers

And if you’re thinking of selling your car, our trusted dealers will be more than happy to bid on it, leaving you just to pick the best offer, receiving your money with no haggling when your car is collected. Simply upload some photos and fill in some basic details with our easy to use Sell My Car service.

The best alternatives to the Ford Kuga
Electric car charger installation cost
Car recalls explained
10 loud cars on sale right now
Electric car conversion: How to convert a car to electric
10 spacious cars with the best driver and rear legroom
Selling a deceased person’s car
Find the cheapest petrol prices – UK price comparison
What is limp mode? Symptoms, causes, and how to fix it
Hydrogen Cars Explained
Types of Electric Cars
10 best sleeper cars
10 best alternatives to the Volkswagen Polo
Hypermiling: what is it and how do you do it?
Electric car salary sacrifice scheme explained