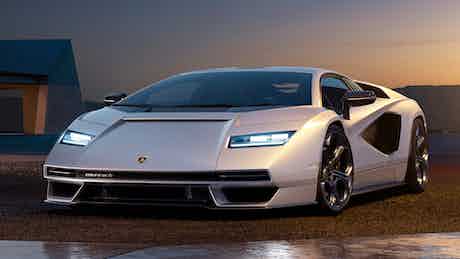 Lamborghini is going back to the seventies and recreating the classic Countach for the 21st century. Can it be as iconic as the original? Read on to find out…

Lamborghini has brought back a classic name, and shape, from the seventies. That’s right, the Countach is back, and it’s packing a massively powerful hybrid V12 engine.

There are probably only a handful of cars that became as genuinely iconic as the original Lamborghini Countach — how many bedroom walls in the eighties were plastered with a poster of a Countach? — and so it’s perhaps surprising that Lamborghini has taken so long to revive the original.

We do mean the original, too. This new Countach LPI-800-4 harks all the way back to the first Countach, the 1974 ‘Periscopio’ version. When it was first launched, the Countach was a clean, sleek, simple design and all the more striking for it. The hateful spoilers, extra air intakes, and balloon tyres came later (what we might call Wolf Of Wall Street spec).

For the new Countach, Lamborghini has kept things clean and smooth. The low, pointy nose references the original design with square LED headlights (no pop-ups, this time around) and a slim, black bar running across the front, which houses a ‘Countach’ badge, complete with eighties-style lettering.

Around the sides, the scissor doors (they open up and forwards) are cut deeply into by a big NACA-style air duct, that helps to feed the mighty V12 engine behind. There are also air scoops and ‘gills’ higher up on the rear bodywork.

Around the back, the rear end of the car comes almost to a point, and there’s no big, ugly rear wing to spoil the lines. The LED brake lights — ultra-slim units — are set into a black panel just under the lip of the rear bodywork, and below them, there’s a massive carbon fibre diffuser, quad exhausts, and the finishing touch of an Italian tricolour.

You can choose from 33 different colours for your Countach, including a set of ‘heritage colours’ such as the brilliantly named ‘Verde Scandal.’

The Countach will use the same 6.5-litre V12 mild-hybrid as the limited-edition Lamborghini Sian. It has a combined output of 814hp — 780hp of that comes from the petrol engine, while the other 34hp comes from the hybrid system.

This will likely be the last time that Lamborghini uses its super-capacitor hybrid system. Super-capacitors react more quickly than conventional batteries, charge more quickly, and are lighter — Lambo says that its super-capacitor gives three times more power compared to a lithium-ion battery of the same weight — but they can’t hold on to a charge for long. For that reason, Lambo is likely to switch to a plug-in hybrid V12 for its next flagship supercar and is planning to develop a new all-electric car, too.

But back to the Countach for now… Performance is pretty staggering – how does 0-62mph in 2.8secs, and 0-124mph in 8.6secs sound? It has a top speed of 207mph too, assuming you own your own race track… The Countach has four-wheel drive, just like the Sian and Aventador that share much of its mechanical makeup.

Back in 1974, the original Countach broke the supercar mould with its racing-car influenced tubular spaceframe chassis, side-mounted radiators, and forward-facing gearbox. The new Countach uses contemporary racing car tech — the chassis and bodywork are all made from lightweight carbon fibre, keeping the dry weight (no fluids, no driver, no fuel) down to 1,595kg. That gives it a power-to-weight ratio of 510hp per tonne.

There’s some clever modern tech built into that seventies shape, including moving air vents made with a 3D printing process, and a photochromatic roof that changes from solid to transparent at the push of a button.

The wheels — styled after the original Countach’s ‘telephone dial’ alloys — are 21-inch items front and rear, and get Pirelli P Zero Corsa tyres. Behind them are massive carbon-ceramic brake discs.

The interior of the Countach comes largely from the Sian, but it does get rather lovely quilted red-leather seats in a retro design. There is modernity in the shape of an 8.4-inch HDMI centre touchscreen, which has been made especially for the Countach. On it, you’ll find a unique button marked ‘Stile’ (Design) — press it, and the infotainment system will give you a history lesson all about the Countach’s design.

The new Countach will be shown off first at The Quail: A Motorsports Gathering; part of the huge Monterey classic car festival in California. With just 112 due to be made, we’d be surprised if it doesn’t sell out right there and then.

How much? Well, the Sian was put on sale at £2.6-million, plus taxes, so you can expect the Countach to be playing in much the same ballpark. Still, you might be able to get a poster of it.