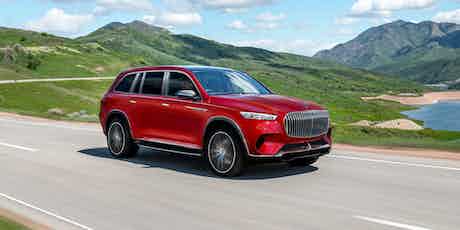 Our exclusive render previews the Mercedes-Maybach GLS – Merc’s four-wheeled excuse to spend even more money than you do on a normal GLS. It’s an alternative to cars such as the Bentley Bentayga and Range Rover SV Autobiography LWB.

Find the off-road-ready G-Class to be a little too utilitarian to fulfill your need for an uber-posh SUV? Well, Mercedes has the answer in the form of the Maybach GLS.

Just like its S-Class namesake, the Maybach GLS gets a vertical-runged chrome grille, unique alloy wheels, chrome strips down its flanks and subtle Maybach badges on its rear pillars. What’s not so clear from our picture is that it’ll also be longer than the standard car.

That’ll be most noticeable from the inside (if you’re lucky enough to be chauffeured in one) where you can expect rear legroom to be, well – epic! And, like in the Vision Mercedes-Maybach Ultimate Luxury concept car show at the Beijing motor show, you no doubt get a pair of fully adjustable seats similar to the ones you’ll find in business class on a long-haul flight.

Along with the fancy seats, you’ll get must-have accessories such as a champagne fridge complete with Maybach flutes, huge infotainment screens, electrically operated blinds and a sunroof that flashes opache at the hit of a switch.

So you’ll be wrapped in luxury, but there’s no need to feel bad for your chauffeur because even basic models are set to get the same twin-turbo 4.0-litre V8 that’s fitted the S63 saloon.

The engine you really want, though, is Mercedes’ creamy smooth 6.0-litre V12. It produces 630hp and a staggering 1,000Nm of torque from just 2,300rpm. That’s enough to get a large SUV – even one as large as the GLS – from 0-60 in four seconds dead and on to top speed far higher than you’d ever want to go in a car this large.

The bad news? You can expect the Maybach GLS to cost nearly £200,000 when it goes on sale next year.

Bookmark the carwow news page to stay up to date on all the latest models.