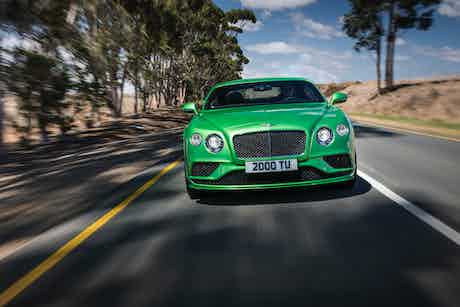 Bentley has revealed the latest changes to the constantly-evolving Continental GT. The big coupe has been with us since 2003, but constant improvements have seen it remain one of the very best luxury coupes money can buy.

We’ve taken a look at what’s new for 2015, and explained the differences using eyeball-poppingly gorgeous photos of this most refined of bruisers.

Technical highlights revolve around an upgrade to the huge 6.0-litre, twin-turbo W12 engine. Total output now stands at 590hp and 531lb ft of torque – respective increases of 15hp and 15lb ft. Thanks to the ability to run on only half of the twelve cylinders under light throttle loads, fuel efficiency has improved by five per cent, with claimed consumption just breaking 20mpg.

Would you mind such fuel economy when your car looks this good in the sunshine?

Indeed it is. The reshaped front lends the car a more “assertive and confident” appearance, according to Bentley, though we think the new treatment below the grille looks ever so slightly like the moustache of the type of well-to-do gentleman who has traditionally favoured a Bentley. Just behind the re-profiled front wheel arches sits a new air vent, styled in the shape of the Bentley ‘B’.

The rear features a more sharply sculpted boot lid, shaped to improve aerodynamic efficiency. The rear bumper has been slightly widened for an extra dose of aggression, while V8 S and GT Speed models gain an updated rear diffuser to further differentiate their look from the other models in the range.

New alloy wheels have been added to complete the look of the updated Conti. GT V8 and W12 models are fitted with a new 20-inch six-tri-spoke wheel, while an new 21-inch five spoke design is available on the sportier V8 S and GT Speed variants.

What about the inside?

The Continental’s interior has always been a rather lovely place to sit for extended periods, so the changes are as equally as subtle as the exterior updates. The standard leather seats feature a striped stitching pattern through the centre, while the special edition Mulliner Driving Specification model features a diamond quilted finish in its place. A mildly revised steering wheel design gains reshaped paddles for the automatic gearbox, sitting in front of new dials with more modern graphics.

If the regular cow hide draped across the seats wasn’t soft enough already, the seat cushions and backrests can optionally be finished in a special dye which doesn’t require a special topcoat, resulting in a smoother, more natural finish. Thanks to the standard fitment of on-board wi-fi, it’ll now be even easier to tweet everyone you know how much more wealthy you are than they.

Anything else I need to know?

The Bentley Flying Spur has gained similar upgrades, with improved efficiency of its W12 engine and the same subtle interior tweaks. Bentley CEO Wolfgang Dürheimer explains the changes, adding: “we listen carefully to our customers, and with these new evolutions we’re making our cars even more stylish, efficient, connected and usable every day.”

When can I buy one?

There are no official comments about prices yet, though it’s unlikely that there will be much deviation from the current circa £140,000 mark. Deliveries of both the updated Continental and Flying Spur will start in summer 2015.