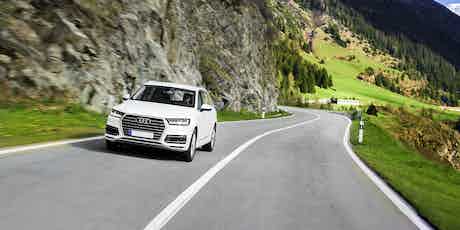 Audi has announced a new ‘Ultra’ engine for the Q7 model which promises lower emissions, greater fuel efficiency and better value for money

The Audi Q7 SUV is now offered with a highly efficient ‘Ultra’ diesel engine. According to the brand, not only is the engine new, it’s also much more frugal than previous versions.

It returns an impressive 51.4mpg from its 3.0-litre V6 turbocharged diesel which Audi says is 28 per cent more efficient than previous versions.

The Ultra engine’s power has been reduced to 218hp from the standard car’s 268hp, but it still accelerates from 0-62mph in 7.1 seconds. It also has a healthy 368lb ft of torque making it an ideal choice for those wanting to tow.

This engine is now available to order and it is expected that deliveries will begin in September. Prices have been dropped to reflect the engine’s lower power level – entry-level Audi Q7s now cost from £40,473.

Put the Audi Q7 in our car configurator to find out how much carwow could help you save. For more options, head over to our deals page or, if you’re still struggling to pick your next car, check out our car chooser.