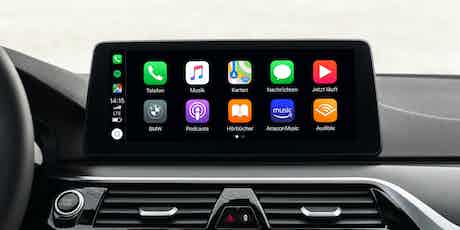 Read on for all the latest updates for Apple CarPlay, including new features and iOS 14 upgrades.

Apple CarPlay is a great way to link your iPhone to your car, letting you use a range of apps – such as music-streaming and navigation apps – through the display on your dashboard.

Getting set-up with Apple CarPlay is easy. Make sure your car is compatible first, then plug in your phone using a USB cable and follow the on-screen instructions – it doesn’t take long. Some models, most notably BMW and MINI cars, have wireless CarPlay. This takes a little longer to set up initially, but it’s worth doing because it’ll automatically connect next time you get in your car.

Once your phone’s connected, you’ll see the Apple CarPlay interface appear on the screen. You can open various apps installed on your iPhone through the system’s home screen. You can also press the voice control button to access Siri, the iPhone’s voice assistant.

In June, a few updates for Apple CarPlay were announced at the Apple Worldwide Developers Conference. Custom wallpapers were added, letting you choose what colourful backdrop is displayed behind the app icons on the home screen.

A new feature is also set to be added to the Apple Maps app: EV routing. This lets electric car owners plan a trip easier by adding public chargers into the route. It can even communicate with the car to see how much charge is remaining, so you won’t miss your last chance to stop and fill up. This feature is going to be rolled out across all cars, starting with BMW and Ford models.

The Google Maps app is also getting an update that lets you display it on the home screen. Previously, you could only do this with Apple Maps. It’s great for users that prefer Google’s smart, clear maps and directions.

Apple is going to roll out its new iOS 14 operating system soon, and it includes a handful of updates for Apple CarPlay, among other features. The new wallpaper feature mentioned above will make its debut here, and these will automatically adjust to a darker theme at night.

New apps for EV charging, parking and finding restaurants will be added, too. Plus, Siri will have new graphics and bring a selection of new features.

The new iOs 14 also brings with it updates for the Apple Maps app. Speed camera alerts are new, along with the aforementioned EV routing for certain cars.

CarKey is a feature relevant to car fans but not directly related to Apple CarPlay. It’s a system that, on certain compatible cars, will allow you to use your phone to unlock the car rather than a traditional key. BMW has introduced this feature as an optional extra on many of its cars.

Configure your next new car