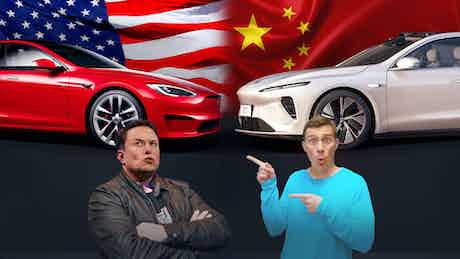 Chinese electric-car maker Nio is making waves in the EV industry thanks to its range of new electric cars and clever battery-swapping technology. Read on for everything you need to know.

Nio might sound like a car maker founded by Keanu Reeves, but it’s actually a Chinese startup that’s quickly become one of the world’s most valuable electric-car brands.

But one of the most interesting things about the EP9 (shown above) wasn’t to do with its speed or its £2 million price tag; it was to do with recharging. And it’s a feature that comes in all of Nio’s new SUVs and saloons…

In a normal electric car, such as a Tesla, the batteries are fixed within the car, and you have to recharge them when they go flat, which takes time. Even today’s super-fast public chargers take about half an hour to boost your EVs batteries from empty to 80% full. And you can’t keep fast-charging your car over and over again, because that can damage the battery.

But Nio has invented a way to boost its cars from empty to 100% charged in under 10 minutes using swappable batteries. When you’re running low, you can just drive to a special Nio garage and swap your flat battery for a fully charged one in around three minutes.

And Nio’s battery-swapping service isn’t very expensive. Each car comes with free battery swapping for the first owner, and second-hand buyers just pay for the energy they use – just like you would with a Tesla Supercharger.

Nio has currently built 191 swap stations in 76 cities and plans to have 500 stations up and running by the end of 2021. But, the clever thing about Nio is that you don’t HAVE to swap the battery – you can still plug your car into a normal public charging point if you want to.

And, Nio has another trick up its sleeve. If you buy one of its cars, you get access to a fleet of rescue vans with built-in chargers. These will come out and help you if you run out of charge in the middle of nowhere – a bit like what the RAC is doing in the UK now.

There’s another clever side to swappable batteries. Because Nio can make its cars much cheaper by selling the batteries separately. So you can buy a new car with a battery, or you choose to pay around £7,700 less, and rent the battery from Nio. And it’ll cost you about £108 a month.

About a third of Nio owners are choosing to do this, and it means that Nio can make its cars cheaper than an equivalent Tesla. Take Nio’s cheapest car, for example. It’s called the ES6 SUV and it’s Nio’s take on the Tesla Model Y.

Tesla claims the Model Y will do 314 miles on a charge, according to the latest WLTP range tests. While Nio says the ES6 can top 380 miles. But, you need to know that Nio’s figures come from older NEDC range tests, which were a bit ‘optimistic’. But, even in real-world driving, the Nio should still manage at least 250 miles on a charge.

And the ES6 is no slouch, either – the fastest ‘Performance’ version has 550hp and it can do 0-60mph in 4.7 seconds. There’s also a coupe version called the EC6, which is even faster. It does 0-60mph in about 4.5 seconds, which is only a second slower than the fastest Tesla Model Y Performance.

And, Nio doesn’t just make SUVs – it’s also launched a brand-new saloon called the ET7. You can think of this as Nio’s Model S – it’s an upmarket saloon that’s all about having the longest range, the fastest motors and the best tech.

Let’s start with speed, because the quickest version of this car will do 0-60mph in 3.9 seconds. That’s just as quick as the new BMW M4 Competition, but still significantly slower than the latest Model S Plaid, which can do 0-60mph in 1.99 seconds.

Tesla claims the Model S Long Range can do 412 miles on a charge according to the latest WLTP tests, and the Plaid + can do more than 520 miles. If you convert these numbers into NEDC figure (like Nio uses) that’s getting on for almost 600 miles of range. But, Nio claims the ET7 can go even further – it reckons that top-spec cars can do 620 miles between charges. That’s more than most petrol and diesel cars can do without a fill up.

Part of the reason the Nio ET7 can go so far is because its 150kWh batteries are some of the largest fitted to any electric car you can buy. And, when you chuck in a bigger battery you get more range – it’s as simple as that.

So, what’s stopping Tesla from putting an even larger battery in the Model S. You know, to show Nio who’s boss? Put simply, bigger batteries take longer to charge. It’s just like giving a car a bigger fuel tank – you can drive further, but it takes longer to fill up.

And this is where Nio has the edge. Because, no matter how big it makes its batteries, they still take pretty much the same amount of time to swap. So, when you run out of juice you’ll be ready for another 620 miles in as little as three minutes.

Nio has sold more than 50,000 cars so far in China, and done more than 650,000 battery swaps. It’s just launched its fifth new car since 2014, meaning (on average) it releases a new car every 18 months. Tesla has been around for more than 13 years and it’s only launched 6 different cars in that time: the original Tesla Roadster, the Model S, the Model X, The Model 3, The Model Y and the Cybertruck…

You can’t buy Nio cars in the UK yet, but check out carwow’s pick of the top 10 best electric cars on sale for a range of great EVs.