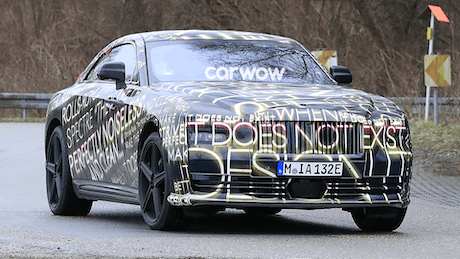 Rolls-Royce will reveal its first electric car soon. It’ll be called the Spectre and will be a super-luxurious two-door coupe that’ll go on sale before the end of 2023.

A prototype of the upcoming Rolls-Royce Spectre electric car has been spotted testing in public. It’s the brand’s first EV and is set to go on sale before 2023. This car is the first step in the brand going fully electric by 2030.

This new model will likely be even more luxurious than the Mercedes EQS and will almost certainly cost more, too – although, Rolls-Royce is yet to reveal any specific details on the car’s performance, or price.

The new Rolls-Royce Spectre hasn’t been revealed just yet, but this thinly-disguised prototype shows just how similar it looks to today’s Rolls-Royce Wraith coupe.

Although the prototype in these photos is covered in black camouflage with luminous yellow writing, you can spot the tell-tale sloping roofline, long bonnet and rear-hinged doors – much like Rolls-Royce’s current ultra-luxurious two-door car.

Unlike that car, however – which shares some components with an older version of the BMW 7 Series – Rolls-Royce will borrow parts from the  Phantom and Ghost saloons, and the vast Cullinan SUV to build the new Spectre.

Rather than the bespoke V12 petrol engine you’ll find in other Rolls-Royce models, the new Spectre will be powered by electric motors. This seems like a sensible move when you consider Rolls-Royce has always aimed to build the most refined and relaxing cars on the market.

Rolls-Royce has yet to confirm what batteries the Spectre will use, but you can expect the new Spectre will aim to trump the Mercedes EQS’s 470-mile range. If so, it’ll likely need an even larger battery than that car’s 108kWh unit.

Rolls-Royce is staying equally tight-lipped about the new Spectre’s electric motors. It could choose to develop its own or it may decide to use motors from parent company BMW.

BMW’s most powerful electric production car to date is the iX M60 – a dual-motor SUV with 610hp. If it makes use of this setup, the Spectre would have would give the Spectre just shy of 90hp more than the 523hp Mercedes EQS.

However, BMW has also been testing a 720hp electric prototype that uses three electric motors. These could see service in the new electric BMW i7, but may also find their way into the new Rolls-Royce Spectre.

Whichever motor and battery combination Rolls-Royce chooses, you can bet the new Spectre will be one of the most expensive electric cars on sale.

Rolls-Royce has confirmed that the first customers should receive their cars in the last few months of 2023.

If you’re looking for a new EV, compare the best electric cars on sale now or check out the latest carwow deals on the best new cars.