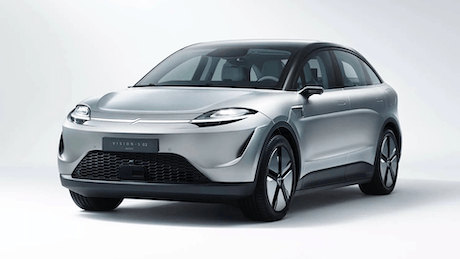 This is the latest electric concept car from Sony — and the tech firm sounds like it’s seriously considering building it. Read on for full details.

Sony is kicking off 2022 with a big surprise by making serious intentions about building a road car.

This is the Sony Vision S 02 SUV, which is the second concept car from the firm and takes the form of a large electric SUV like the Tesla Model X, Audi e-tron and Mercedes EQC.

The first concept from the Japanese tech giant was said to be little more than a demonstration of its technology, though things are different this time.

Sony will establish ‘Sony Mobility Inc.’ in Spring and has explicitly said it ‘intends to explore entry into the EV market’.

It’s clear the Sony Vision S 02 SUV (left) has been heavily influenced by the saloon pictured alongside it below.

For instance, it uses the same headlight design with a full-width LED lightbar cutting through the centre of the car. Even the bumper looks very similar, albeit with its intakes sitting up higher and with a larger grille.

A two-tone paint scheme features as well, though the seven-seater SUV naturally has a much higher roofline with a sharp drop towards the rear, a little like the Tesla Model X.

There’s minimal fuss at the rear. Aside from a huge LED lightbar, there’s very little in the way of design features.

Of course, being a product of Sony, the Vision S SUV 02 is loaded technology — both in terms of driving and entertainment.

Semi-autonomous technology to rival Tesla’s Autopilot will feature, along with driver monitoring features to make sure you’re paying attention.

You’ll also be able to select from a number of synthetic ‘engine’ sounds and customise the theme of the digital displays.

5G technology will allow for over-the-air software updates. Though perhaps more excitingly, this will let you play PlayStation games remotely as well.

Just think, your passengers might be able to drive a virtual Sony Vision S on Gran Turismo while you drive along in the real one.

Sony seems pretty serious about building the Vision S 02 SUV, but it’ll likely be some time before it makes its way to the roads.

If it does happen, don’t expect to see anything until 2023 at the very earliest. It would likely be priced around the Tesla Model X — so about £90,000 seems likely.

Keen on an electric car? Compare the latest models on sale now