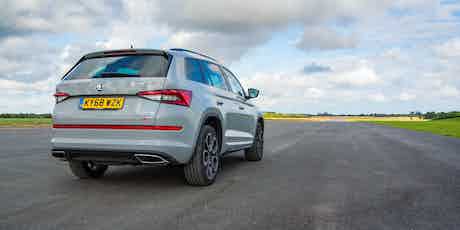 Our big-booted Skoda Kodiaq has already proved its worth when it comes to lugging loads of luggage, but we’ve yet to properly test out whether this whopping-great box-on-wheels deserves to wear a vRS badge…

Sure, the vRS logo doesn’t quite carry the kudos of BMW’s M division, but that’s not to say this supposedly more athletic SUV can rest on its laurels in the performance department.

Take a glance at the stats, and things look pretty good. The Skoda Kodiaq vRS’s 2.0-litre turbocharged diesel engine produces 239hp, which is enough to launch this not-insubstantial SUV from 0-60mph in less than seven seconds.

The slightly sportier bumpers are another nice touch – as are the huge 20-inch alloy wheels – but we aren’t exactly fans of the Kodiaq vRS’s sound synthesiser that pipes fake engine sounds inside the cabin and outside to unsuspecting pedestrians. Think more along the lines of an amplified exhaust leak than rumbling race-bred V8 and you’ll be on the right track…

But, more importantly, does any of this actually make the Skoda Kodiaq vRS feel sporty to drive?

Well, on motorways – where big SUVs like this spend plenty of time – the almost immediate torque delivery from the Kodiaq vRS’s diesel engine means you can blast past HGVs without the standard-fit automatic gearbox having to change down too often. Handy when most of the driving we’ve done in the vRS recently has been long motorway slogs between video shoots.

It feels reasonably pokey from a standing start, too – partly thanks to the Skoda Kodiaq vRS being one (if not the only) seven-seat diesel-powered SUV to come fitted with launch control as standard. Although, the way the Kodiaq vRS pitches backwards on its high-riding suspension when you floor the accelerator is probably as much to thank for the resulting sensation of speed than any electronic trickery.

We experienced this first-hand on a recent video shoot when we promoted the Kodiaq vRS from behind-the-scenes crew transport duties to pride of place in front of the camera. First, in a race against three smaller cars from carwow’s test fleet, then again in a showdown with the latest – and yellow-est – addition to the carwow long-term test-car garage – a Jeep Wrangler.

In the first race, the more powerful Skoda Kodiaq vRS with its grippy four-wheel-drive system and launch control got a pretty stellar start and managed to stay ahead of the lighter – and more aerodynamic – Kia Proceed GT. It crossed the finish line in 14.8 seconds – hardly a blistering pace, but not bad for a seven-seat family SUV.

To up the ante, we pitched the Skoda Kodiaq vRS against the most powerful, and fastest, version of the Jeep Wrangler with a 280hp turbocharged petrol engine. We won’t spoil the result for you – instead, you’ll just have to wait until our video goes live over on the carwow YouTube channel to find out how the vRS fared…

Before picking it up for this review, I’d already had one shot at our (latest) Kodiaq; if I’m being honest, I wasn’t particularly interested in driving it again. That might sound harsh, but a quick blast around the carwow test track was enough to confirm one thing: the vRS is as sporty as my garden shed.

It isn’t exactly invigorating on a track. Although you’d be mad to expect it to be. On the road, it actually turns out to be a different story. It’s a torquey beast so, while it might not be that quick by modern standards, it makes overtaking a cinch – and quite enjoyable. It’s got resonators in the exhaust that trick your ears into thinking there’s a (lazy) V8 petrol stuffed under the bonnet, not a humble four-cylinder diesel.

While the twin-turbocharged diesel feels bigger than it actually is, the Kodiaq’s interior doesn’t need to be deceptive: it really is big. After all, it’s big enough to carry five adults and a couple of kids in the third row (I don’t have the human resources to actually test this).

The boot, meanwhile, can swallow a couple of bulky full-suspension mountain bikes with no trouble. Brilliantly, I managed to fit them in with only some very minor scuffs to the interior’s plastics. Sorry, Skoda…

Another thing I like is the Kodiaq’s image. It might not be as flash as a truly sporty SUV, like an Audi SQ5, but neither do you feel like a complete berk driving it. This can be backed up by the volley of admiring glances I’ve received while behind the wheel.

So while I don’t need a car as big and as practical as a Kodiaq in my life, if I did have a wife, two kids and a dog, you can bet I’d be beating down the doors of my local Skoda showroom.

Why so many miles? Well, its powerful diesel engine gives just the right mixture of performance and fuel economy for long drives, its spacious interior has loads of room for skiers and their kit and, of course, it’s four-wheel drive so even when the roads turn snowy, the Kodiaq shouldn’t ever get caught out.

That’s the theory anyway, but how did it pan out in practice?

Well, we found the Kodiaq did indeed eat up the miles with ease. Its twin-turbo diesel engine not only sounds grunty (thanks to a fake noise pumped through the stereo speakers) it is grunty. Grunty enough to deal with Alpine ski slopes without getting in a tizzy. Factor in active cruise control that brakes and accelerates the car for you, and it’s hard to think of a better cruiser for the price.

That said, you do get what you pay for and, in the case of the Skoda Kodiaq, that means you get lane-keep assist that bounces you down the sides of your lane like a pinball machine. The system you get in, say, a Mercedes does a much more convincing job of guiding you down your lane in a controlled fashion but then, of course, you pay for it!

And to have a Mercedes with the same interior space you get in the Kodiaq, you’ll be paying quite a lot! The vRS is extremely comfortable with four adults aboard and even with two people in all three rows, the Skoda still has space for ski boots. There is room for improvements, though, and it would be nice if the Kodiaq’s seats flattened down electrically – because folding all five back seats individually can be a pain if you’re in a rush.

For the most part, though, even the trip to France couldn’t unstick the Kodiaq. Stay tuned for our next update when we find out if the vRS really is any better to drive than the standard model.

You see, our previous 2.0 TDI 190 Sportline was loved by all at carwow, but there was no escaping its hefty price tag. Indeed, after options its final price was £44,690. Which got us thinking, if the quicker vRS model you see here costs £42,870 and comes with a longer list of standard equipment, is it worth buying that instead?

We’ll be running through the trim differences between each car in our next post – for now, let’s focus on the vRS. Rather than a petrol engine, it comes with a 240hp bi-turbo diesel, all-wheel drive and a seven-speed automatic gearbox as standard. That means it’s good for 0-60mph in less than 7.0 seconds (our old Sportline took 8.6 seconds) and will carry on to 136mph if you can find enough (legal) Tarmac. On the outside, the vRS and Sportline models do look similar with the gloss black grille and mirror cap details, although there are some giveaways. The vRS gets 20-inch ‘Xtreme’ alloy wheels, red brake calipers, unique front and rear bumper designs and, of course, vRS badging front and back.

Inside you’ll find Alcantara sports seats with vRS badging, vRS stitching on the door cards and Skoda’s Virtual Cockpit digital instrument binnacle included as standard rather than being an option. These digital dials also come with unique vRS graphics, rather than those you’d get further down the range. Then there are some additions to improve the driving experience over Sportline trim, including standard adaptive dampers to stiffen or soften the suspension at the touch of a button, so-called ‘progressive steering’ which essentially makes it more responsive when pushing hard and something called a dynamic sound booster. This creates a sporty noise inside and outside the car to help you forget you’re driving a diesel. Options-wise, our car’s heated steering wheel is already coming in handy in the mornings, and so too are the heated windscreen and washer nozzles. We’re yet to use the electric towbar, but have plans to fit a bike rack before long, while blind spot and lane assist are both well worth the cash if you spend a lot of time driving on the motorway. Having rear window blinds and an electronic child lock as part of Skoda’s Childrens pack will come in useful too.

So far, despite the vRS officially being 3mpg worse than our old Sportline on its combined cycle, we’ve actually seen very similar real-world fuel economy of around 37mpg. It’s early days though, so we’ll be keeping a close eye on which way that figure goes over time. We’ll also be able to tell you whether it’s worth going for a vRS over the Sportline model, and if, frankly, Skoda’s sporty vRS badge should be affixed a diesel SUV at all. Check back soon for more.