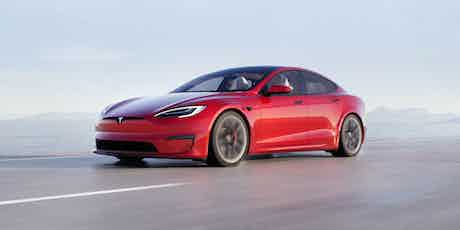 The first Tesla Model S Plaid models are about to be delivered to customers on June 10th, but CEO Elon Musk has just announced that the range-topping 1,100hp Plaid+ variant will no longer be offered. Musk tweeted that the Plaid was just so good, there was no need for the Plaid+.

Plaid+ is canceled. No need, as Plaid is just so good.

The Plaid+ was slapped with a $10,000 (£7,000) price hike in March, so there’s a chance it had been deemed financially unviable. Supply chain issues during the course of this year and a computer chip shortage currently facing automakers may have also contributed to the axing of the Plaid+.

There isn’t a big visual difference between the updated Model S and the existing version. The most obvious change is the redesigned front bumper, now with additional air vents. The body is wider too, although you would have to place the cars side-by-side to notice.

Bigger changes have taken place in the cabin. Here, the massive 17-inch touchscreen is now horizontally mounted. Another screen is mounted ahead of the driver and a third is placed between the front seats for rear passengers to watch shows or play games.

The quality of the interior should also see a big step up from the current model, with a more substantial centre console covered in wood inlays and aluminium trim.

The most radical element of the new Tesla Model S’s interior is the steering wheel if you can even call it a wheel anymore… The square wheel looks more like something you’d find in a Boeing 737 aeroplane than a car and does away with stalks for lights and wipers in favour of touch control buttons.

There are no regulations in the UK that require a car’s steering wheel to be round, so it’s possible that this radical design (along with a conventional round wheel Tesla has also developed) will be offered on UK-spec Model S cars.

The Plaid+ may no longer be coming but the tri-motor Plaid variant is hardly any less impressive. it boasts a near-identical 1.99-second 0-60mph time (the Plaid+ could reportedly reach 60mph from zero in ‘less than’ 1.99 seconds) and a top speed of 200mph. The Plaid’s three motors produce 1,020hp and it comes with 390 miles of range.

The Long Range model utilises a dual-motor setup and manages a 3.1-second 0-60mph time. That’s still supercar-quick, then. It has 412 miles of range (more than any other Model S) and a top speed of 155mph.

The very first Tesla Model S Plaid customers are set to receive their cars at an official Tesla event on June 10th. Order a new Tesla Model S now and you’ll probably have to wait until 2022 to get your hands on it, however.

Can’t wait until 2022 to get hold of a new EV? Compare the best electric cars on sale now or check out the latest Tesla leasing deals available through carwow.

Want to get the latest Tesla news?