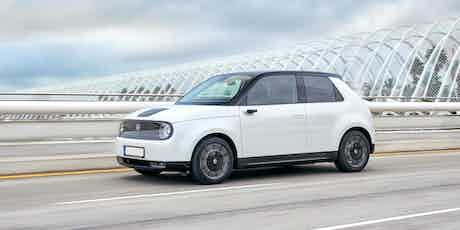 The Government offers a grant to help drivers make the switch to a new low-emissions vehicle, but how much is it worth and which cars are eligible? Read on for full details and to see how you can save money…

The ‘Plug-in Car Grant’ (sometimes shortened to PiCG) is available across a huge number of electric cars on sale today and sees £1,500 knocked off the list price of many new electric cars.

Want to see which cars are eligible and find out more about the Government Plug-in Car Grant? Read on for full details.

What is the government plug-in car grant?

The Government Plug-in Car Grant is a £1,500 discount applied to brand-new electric vehicles, as long as the initial RRP (including VAT and delivery fees) is less than £32,000.

Plug-in hybrid cars were once eligible for the grant, but this is no longer the case.

How does the plug-in car grant work?

The Plug-in Car Grant was introduced in 2011 with the aim of reducing CO2 emissions in the UK. It was designed to make electric cars more appealing and affordable to tempt buyers out of their old-fashioned gas guzzlers and into something greener.

The Government has pledged to reach net-zero emissions for the UK by 2050, and the PiCG plays a big part in reaching this goal. In the autumn of 2021, a further £620m has been pledged for EV grants across the country, meaning it is likely to extend beyond the current 2023 cut-off announced in the spring budget.

What is the net-zero strategy?

To take advantage of the Government’s plug-in car grant, all you have to do is buy an eligible car – it’s really that simple. The grant will automatically be applied to the list price of any qualifying electric car, with the dealer then applying to receive the difference at the point of sale.

Which cars are eligible for the plug-in car grant?

Only fully-electric cars are eligible for the plug-in car grant. Up until December 2020, any car that produced CO2 emissions of less than 50g/km and could travel at least 70 miles without emitting anything were eligible but this no longer the case.

Your new car also has to have an RRP under £32,000, VAT and delivery fee inclusive, in order to qualify. It’s worth bearing that in mind if you’re considering a few optional extras that pay push the total price above this threshold.

How do I apply for the plug-in car grant?

The good news is that it’s easy to take advantage of the PiCG. When you buy a qualifying car, the £1,500 grant is automatically applied – the dealer will apply to claim the money back after the sale.

Are there any other electric car grants available?

If you buy any category 1, 2 or 3 car, you’re eligible for a dedicated home charger grant.

This is a subsidy for having a charging point installed at your home, officially called the Electric Vehicle Homecharge Scheme, worth up to £350.

All you need is a qualifying car and a dedicated off-road parking space.

How long does the plug-in car grant run for?

In the spring budget 2021, the Government announced that the PiCG would last until the 2022/2023 financial year. While the future of the scheme beyond this is unconfirmed, the Government has just pledged a further £620m for EV grants in the autumn budget, so it’s likely the PiCG will extend beyond this date.

Can I claim the government plug-in car grant after buying an electric car?

Unfortunately, you can’t claim a grant once you’ve already got your car.

The PiCG is applied at the point of sale if you buy a new electric vehicle as a discount – it’s not available as a refund.

Does the government plug-in car grant apply to used cars?

The government plug-in car grant only applies to brand-new cars, so you can’t claim a grant towards a second-hand vehicle.

Every electric car ranked by range

With that in mind, you might find it’s not a whole lot more expensive to opt for a brand new electric car than a second-hand equivalent.

Are carwow prices inclusive of the plug-in car grant?

Yes. When you get offers on an EV through carwow, the price will be inclusive of the PiCG. You can then be sure that you’re getting the best price from our trusted dealers.

Are hydrogen cars eligible for the government plug-in car grant?

Hydrogen cars would theoretically be eligible for the grant, providing they came under the £32,000 threshold.

At the time of writing this, though, the only two available hydrogen cars are the Hyundai Nexo and Toyota Mirai, and they’ll set you back between £50,000 and £70,000.

Audi A1 vs A3 side-by-side comparison
What is park assist?
What is a pre-registered car?
Audi A4 vs A6 – is it worth the upgrade?
Drag race: McLaren 765LT vs Porsche 911 Turbo S
How to drive in snow safely: 10 top tips
10 best cars for students 2022
carwow 1/4-mile (400m) drag-race leaderboard
What is AdBlue?
Number plate retention guide
1944 Supermarine Spitfire review — 1,700hp V12 WW2 fighter flown!
What is engine remapping? A complete guide
BMW 3 Series vs 5 Series
6 best new car warranties in 2022
What is MPG in cars?