The fastest cars in the world 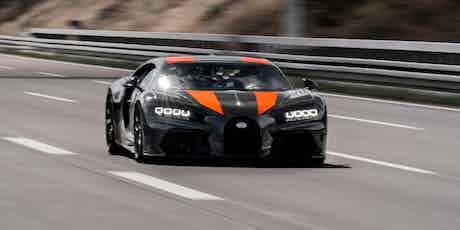 People have been fascinated with fast cars for as long as there have been fast cars – many would argue it’s an incomparable adrenaline rush. But what cars are the fastest? Below you will find the comprehensive list of the five quickest currently on sale. We’ve also compiled the fastest cars that are available on carwow, too, all of which you can with great offers from trusted dealers.

That old cliche of doing what it says on the tin rears its head here because the Bugatti Chiron Supersport 300+ will do, well, 300mph+. More specifically, it managed 304mph when the French firm decided to unleash it at Volkswagen’s Ehra-Lessien test track.

This 1,600hp mega-machine doesn’t officially hold the world record though, as it only did that run in one direction. To break the record you have to do it twice in opposite directions — which for whatever reason, Bugatti decided not to do.

The best cars that were never made

The American SSC Tuatara (Too-ah-ta-ra in case you’re struggling) comes in second on this list, with a pretty respectable 286mph top speed. That said, it’s not without a little controversy.

You see, SSC claimed the Tuatara actually managed 316mph in October 2020 to make it the world’s fastest car — but later admitted to a GPS error that depicted that speed wrongly. Later tests saw it hit a maximum of 286mph (it averaged 283mph over two runs.) Still not exactly slow, is it?

McLaren didn’t design the Speedtail to chase world records, but, with a 250mph top speed, it’s the fastest road car it has ever built.

That’s faster than its last three-seat car — the legendary McLaren F1. Its super-slippery bodywork lacks and drag-inducing wings and means it looks like something ripped straight from a futuristic cyberpunk film. Just think about carrying two of your mates at that speed…

Matching the Speedtail is the Koenigsegg Regera. This Swedish speed machine comes with a twin-turbo V8 engine and an electric motor that produce a total of 1,500hp.

Unlike any other car on this list, the Regera can go from 0-250mph using just ONE gear. Yep, no matter if you’re cruising at 30mph or aiming to hit its 250mph top speed (on a closed course, not the M1) you’ll be in the same gear. Seems a little bonkers.

The most beautiful cars according to science

The fastest naturally-aspirated production car you can buy at the moment comes from the lunatics at Lamborghini. Not all that surprising, really.

The SVJ is the ultimate version of the Lamborghini Aventador supercar and produces a whopping 770hp from its 6.5-litre V12 engine. Its 217mph top speed is actually the same as the standard Aventador S, but the lighter and gripper SVJ will get there quicker and be faster around corners.

The fastest cars available on carwow

It’s been around ages now, but the Audi R8 is still the daddy of Audi’s range — although the new RS e-tron GT could well lay claim to that crown soon. The 620hp R8 Performance is still a properly capable machine though, and its 205mph top speed makes it the fastest car you can get through carwow.

Right now, the Mercedes-AMG GT R is the fastest of the GTs that you can buy through carwow thanks to its 198mph top speed. The faster AMG GT Black Series is still on sale, but that £335,000 car is built to order only.

The GT R can monster 0-60mph in 3.6 seconds, thanks to its 577hp twin-turbo V8, and has plenty of aerodynamic and suspension upgrades over the ‘ordinary’ AMG GT S to help it corner more quickly too.

The Honda NSX is on eof the few hybrid supercars on sale – its 3.5-litre V6 engine is fitted with an electric motor to help this mid-engined monster return a claimed economy of 28mpg. It’s a quiet cruiser that makes for a proficient day-to-day vehicle. However, behind that practicality is a supercar that’s armed with 581hp and can reach up to 191mph.

Fancy a ballistic saloon car? Look no further than the Alfa Romeo Giulia Quadrifoglio. This twin-turbo V6 saloon delivers a stonking 510hp, all of which is sent to the rear wheels only.

Keep it straight and it’ll manage 191mph with enough space. And, this is in a car that you could quite easily take the kids to school in — and probably embarrass them a bit with the raucous exhaust.

For something just as capable on a track as it is crossing the continent, the BMW M8 Competition is a seriously impressive GT car. Given enough room, and it’ll top 190mph.

It’s not a stripped-out race car, though. It’s laden with luxury touches, has an impressive infotainment system and it’s genuinely very comfortable. You’ll have no trouble eating up mile after mile of autobahn in an M8.