10 highest horsepower cars you can buy 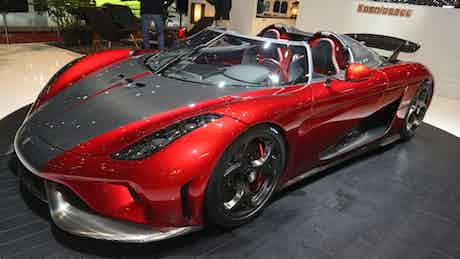 If you like your cars, the chances are you like to have plenty of power. If this is the case then you’ll want to check out this list of the most powerful cars available.

There are few things more thrilling than buying your foot in the carpet of a high-powered supercar on a drag strip. Granted, most of the cars on this list air on the expensive side of things but that’s (literally) the price you pay for this much horsepower.

Some of the highest horsepower cars available are:

You no longer need a massive engine to get massive horsepower, as proven by the Rimac Nevera. Thanks to a 120kWh battery and four electric motors, this insane car has 1,914hp and 2,300Nm of torque.

It’s much more than just tear-your-face-off fast though, it’s a beautiful place to sit as well. All the interior parts are bespoke to the Nevera and crafted from high quality leather and carbon fibre.

When you think of horsepower, you probably think of Bugatti and the 1,000hp Veyron from the early noughties. Well they’ve come a long way since then, and the latest Bugatti Chiron has 1,600hp.

As if an 8.0-litre W16 engine wasn’t enough, Bugatti decided what it really needed was four turbochargers strapping to it. What’s really insane however is the way you can catapult from 0-60mph in 2.4 seconds whilst sitting in palatial luxury.

When you combine a 5.0-litre V8 engine with three electric motors, the results are always going to be pretty potent. Almost 1,500hp is enough to shoot the Regera from 0-249mph in just over 31 seconds.

It also has no traditional gearbox, favouring a unique system called Koenigsegg Direct Drive which is essentially just a torque converter in place of a gearbox. You get automatic opening for all the doors on the car, as well as a very nicely finished interior.

You may not be expecting to see a four-door saloon car on this list, and yet here we are. The Tesla Model S Plaid is a car you can use to scare supercar owners, and take the family along for the ride.

It’s also packed with tech to make daily driving less stressful, although the ‘yoke’ steering wheel may undo some of that serenity when it comes to manoeuvring. It’s a modern looking car though, both inside and out.

The Dodge Demon really does prove that there’s no replacement for displacement. It was designed with drag racing in mind , and as such didn’t come with a passenger seat as standard. You also need to put 100 octane race fuel in to get the full 840hp, otherwise you have to make do with “just” 808hp.

If you take your drag racing seriously, you could also have the ‘Demon Crate’. This was a box which included a handful of tools, as well as skinny drag wheels for the front, a performance air filter, a new ECU and a replacement dash panel with a high-octane fuel switch.

You can’t really talk about high horsepower without mentioning a V12 Ferrari, and the 812 Superfast is a pretty special one (which it ought to be with a name like that). You can really stretch the legs of that V12, all the way to 9,000rpm, and it sounds pretty incredible when you do.

It’s not just the raw power that makes the 812 so impressive. The fact it’s so comfortable and easy to tame, unlike its predecessor the F12, is truly remarkable. The cabin also manages to be a combination of stripped back and luxurious at the same time, which is an impressive feat.

Another unlikely candidate for a high-horsepower hero, the Rivian R1T is an all-electric pickup truck. The top speed may not be anything to write home about, however the power and torque more than makes up for this in acceleration.

The R1T is also packed with clever features, such as a portable speaker under the seat and a rechargeable torch in the door card. You can also specify a camping kitchen which slides out of the side in case you fancy taking in the great outdoors.

Back to the mental supercars, the Lamborghini Aventador SVJ is one of the final versions of the brand’s flagship. It’s sporting some fairly old tech, such as the single-clutch robotized manual gearbox which can be very jerky at low speeds.

Ignore this though, and you can appreciate that stunning V12 soundtrack and the fact that it’s far less intimidating to drive quickly than you’d expect. In true Lambo fashion, it’s also outrageous to look at with its massive rear wind and aggressive body kit.

McLaren’s naming strategy is pretty straight forward, the 765 LT has 765hp, however that’s about the only thing about this car which is simple. It’s rammed full of technology to make it as fast as possible on the racetrack.

You can adjust what angle you’d like to drift at on the screen, as an example, and there’s an active suspension setup to further improve cornering. The exhaust is made of titanium to save weight, and even the wheels have been on a diet.

Another all-electric saloon makes it to the list, and it’s a pretty special one. The Porsche Taycan really proves that electric cars can be huge fun to drive. It hides its weight through the corners extremely well, managing to be nimble and responsive despite weighing over 2.2 tons.

If the saloon body shell is a touch impractical for you, you can have a gorgeous looking estate version called the Sport Turismo. This offers all the same performance in a versatile package.It really is the ultimate daily driver.