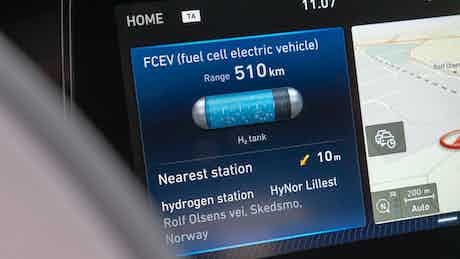 Hydrogen cars sound like the perfect solution to pollution in many ways – but what are they, how do they work, and should you buy one?

As the name suggests, a hydrogen car uses hydrogen as its energy source. Hydrogen cars feature fuel cells that convert the hydrogen into electricity, which is then used to power an electric motor to drive the car’s wheels.

In this article we will delve into the details of how hydrogen-powered cars work, and whether they can be a viable alternative to conventional internal combustion and electric vehicles.

How do hydrogen cars work?

Hydrogen cars, also referred to as Fuel Cell Vehicles (FCEVs), use fuel cells to convert oxygen and hydrogen into electrical energy. This is done by separating electrons from hydrogen molecules; these electrons  constitute the electricity drives the car via an electric motor. The only by-product of this chemical reaction is water.

Most hydrogen fuel cell cars also have a small lithium-ion battery (similar to what you get in a hybrid car) to store electrical energy as it is generated by the fuel cells.

How do you drive a hydrogen car?

A hydrogen car offers a driving experience very similar to an electric vehicle. They usually have a single-gear transmission (so no gear changes) and response to accelerator inputs is immediate, just like in an electric car. The brake regeneration is also similar to an EV, so a hydrogen car will slow down without having to touch the brake pedal.

The instant responsiveness of a hydrogen car makes it perfect around town, although acceleration does taper off at higher speeds. The Toyota Mirai is capable of reaching 60mph in 9 seconds, which is comparable to a mid-level petrol-powered hatchback. The maximum range is dependent on the size of the fuel cells, most hydrogen cars currently on sale offer around 300 to 400 miles of range between fills.

How do you refuel a hydrogen car?

The refuelling process for hydrogen cars is just as simple as in a petrol car; you pull up at the refilling station, fit the nozzle to the car and wait for around three to five minutes for the tanks to fill. The hydrogen in these tanks is stored at around 10,000psi – roughly 30 times the pressure of a car tyre – but Toyota reportedly shot a tank with a rifle during development of the Mirai, proving the safety of the technology.

Filling a hydrogen tank is far quicker and potentially more convenient than charging an electric vehicle. But there are just 14 hydrogen refuelling stations in the whole of the UK as of mid-2022. Five of these are situated within the M25, and clearly the biggest obstacle to hydrogen car adoption is the lack of refilling stations, and the cost of building such infrastructure.

How much does it cost to run a hydrogen car?

Hydrogen is measured in kilograms (kgs) and costs approximately £12 per kg, this gives approximately 60 miles on a kilogram of hydrogen. The table below shows the average costs of travelling 60 miles between various fuel sources:

Hydrogen cars are classed as Ultra Low Emission Vehicles (ULEVs) which means they are not subject to road tax as long as their list price is below £40,000. However every hydrogen-powered car on offer in the UK is above this figure which means you will pay a £310 annual supplement for the first five years. Hydrogen cars are exempt from costs generated by clean air zones, such as London’s ULEZ, though.

What hydrogen cars are available?

Currently your choices are limited to just the Toyota Mirai, starting at £49,995, and the Hyundai Nexo SUV at £69,495. Other car makers have periodically started investigations into hydrogen cars, with the Honda Clarity on sale in the US, but these vehicles arguably remain road-going experiments, and their owners participants in an interesting study.

With plans to produce hydrogen in a more eco-friendly and cost-effective way, we could see more hydrogen vehicles on the roads in the future – although the technology may make more sense for larger vehicles such as ships, trains and lorries.

How is hydrogen made for cars?

Most hydrogen producing facilities use natural gas, although more eco-friendly alternatives like CO2 capture technology and electrolysis are being developed.

How far can a hydrogen car go?

The Toyota Mirai is capable of travelling around 400 miles on a full tank, which is similar to the Hyundai Nexo. The range is dependent on the capacity of the fuel cells, as 1kg of hydrogen delivers approximately 60 miles of range.

They offer reasonable performance. They respond instantly to the accelerator so feel quick around town, however the acceleration tapers off a bit at motorway speeds. The overall experience is similar to an entry-level electric car.

Do hydrogen cars cause pollution?

The cars only emit water out the tailpipe, but the production of hydrogen does create pollution. The exact amount depends on the manner in which the hydrogen is produced. The overall lifetime CO2 emissions are roughly comparable to that of an electric car.

Hydrogen is expensive, as are the cars themselves, and refuelling stations are still very hard to come by, while hydrogen production is an energy intensive process in itself. Plus with electricity being the form of energy that powers a hydrogen car, some argue it is better to cut out the middleman and simply have a conventional EV.

Most hydrogen cars use a small lithium-ion battery as a buffer between the fuel cells and electric motor; this allows them to provide instant responsiveness and an acceleration boost when required.

Considering an electric car for your next set of wheels? Then head over to carwow. Our network of trusted dealers will come to you with their best offers. There’s no need to haggle or negotiate, and you can compare your offers in one place without even having to leave your home.

Check out our latest deals

Car dashboard symbols and meanings
The best alternatives to the Ford Kuga
What to do if you break down on the motorway
Electric car charger installation cost
Car recalls explained
10 loud cars on sale right now
Electric car conversion: How to convert a car to electric
10 spacious cars with the best driver and rear legroom
Selling a deceased person’s car
Find the cheapest petrol prices – UK price comparison
What is limp mode? Symptoms, causes, and how to fix it
Types of Electric Cars
10 best sleeper cars
10 best alternatives to the Volkswagen Polo
Hypermiling: what is it and how do you do it?